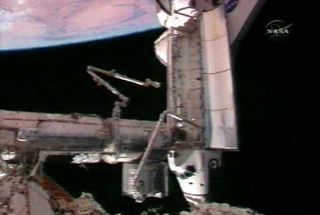 HOUSTON ? Two spacewalking astronautsworked through the night high above the Earth to install Japan's first orbital room and attach hands to a two-armed robot named Dextre.

InternationalSpace Station (ISS) flight engineer Garrett Reisman and mission specialist RickLinnehan, a member of the STS-123 space shuttle Endeavour crew, spent more thanseven hours outside of the space station to complete their on-orbitconstruction work. With astronaut Takao Doi at the controls of the shuttle'srobotic arm, their efforts left the JapaneseLogistics Pressurized module (JLP) securely latched onto the station.

"Takaoshows once again that he is the man," said Dominic Gorie, commander of theSTS-123 mission, who assisted Doi from Endeavour's flight deck. Doi, a JapanAerospace Exploration Agency (JAXA) astronaut, is slated to open up thestation's newest room Friday evening and complete the space station program's15-nation partnership on orbit.

Gorie andhis crew are slated to perform at least four more spacewalks during the longeststation-bound shuttle mission NASA has ever attempted. In addition to Doi,Gorie worked with shuttle mission specialists Bob Behnken and Leopold Eyhartsto support the spacewalker's efforts.

Thespacewalking duo unplugged cables and removed protective covers from the9.2-ton module ? the first piece of Japan's Kibo massive three-part laboratory? making quick work of readying the cylindricalcloset, as Reisman has called it, for installation. As the spacewalkersfinished configuring the room, they witnessed an orbital sunrise.

Doi andGorie then grappled the JLP with Endeavour's robotic arm, twisting and turningthe module into place several hours later to the top of the Harmony node Fridayat 4:06 a.m. EDT (0706 GMT).

Leaving theJapanese module in shape for installation, Linnehan and Reisman moved to thepallet containing the piecesof Dextre on the Port-1 truss of the space station.

The twoastronauts unwrapped the 115-pound (52-kilogram) "hands" of therobot, known as orbital tool changeout mechanisms, and worked during the nextfour hours to bolt them onto the automaton's 662-pound (300-kilogram) arms.

In abriefing after the spacewalk, mission managers here at Johnson Space Centersaid a problem with supplying power to Dextre's pallet is likely caused by a faulty"keep alive" cable that warms vital electronics. Pierre Jean, actingprogram manager for the Canadian space station program, said grappling therobot's "head" with the space station robotic arm Friday eveningshould give it power and prove his team's hypothesis.

"We'repretty confident that 10 o'clock tonight we should have the answer to thisparticular [problem]," Jean said.

"Don'tlook down, but over you're left shoulder is New York," Reisman toldLinnehan as they attached Dextre's hands. "You can make out Long Island sound, and you can see the whole thing at night. It's amazing."

After theastronauts finished their work and secured themselves in the safety of theairlock, spacecraft communicator Nick Patrick congratulated Doi and"Dom" Gorie on their robotic arm work.

"Greatjob to all of you on the flight deck today," Patrick said.

"Thankyou very much Nick," Doi responded. "Dom and I had a greattime."