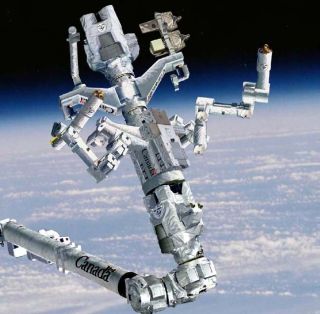 This illustration depicts the Canadian Space Agency's Dextre maintenance robot at the end of the International Space Station's Canadarm2. Dextre and a Japanese module will be delivered to the ISS during NASA's March 2008 STS-123 mission.
(Image: © NASA)

A massive robot and Japan'sfirst room in space are set for delivery to the International Space Station(ISS) next week aboard NASA's space shuttle Endeavour.

Canada's two-armedrobot, named Dextre for its nimble capabilities, should give astronauts abreak from basic repair and maintenance tasks outside of the growing spacestation. The Japanese Logistics Pressurized (JLP) Module marks the first ofthree components for that nation's massive Kibo science lab.

"This flight will be amonumental flight for Japan," said Tetsuro Yokoyama, operations projectdeputy manager for Kibo, during a press briefing at Johnson Space Center thisweek. "We are very close to a long-awaited moment."

The seven-astronaut STS-123space shuttle crew, led by commander Dominic Gorie, is slated to launch at 2:28a.m. EDT (0628 GMT) on March 11 aboard Endeavour. The crew aims to installJapan's new orbital room in a temporary position on March 14, then beginDextre's assembly on March 15.

To fit the Canadian SpaceAgency's $209-million, 3,440-pound (1,560-kilogram) robot into Endeavour'spayload bay, engineers crafted it into large chunks that spacewalkingastronauts could assemble outside of the ISS.

Once astronauts latch eachpiece in place and attach it to a mobile platform on thespace station, Dextre will be able to do many standard tasks with anastronaut or earthbound operators at its controls.

"He's got huge arms,kind of got like a head up there and a lower torso," said astronaut RickLinnehan, a mission specialist on the STS-123 mission, comparing it"Gigantor," a famous cartoon robot. "It allows us to ? increasethe amount of robotics tasks we do up on station."

That's important, NASAofficials have said, because spacewalking is risky business for astronauts. Thenew robot is also expected to give space station crewmembers more time to focuson science and other tasks, they added.

"It's sitting outthere in the harsh environment of space all the time, basically ready togo," said Daniel Rey, manager for the Dextre project. "It doesn'trequire any pre-breathe protocol and it doesn't require any cleanup. It's anoperational robot that's pushing the limits of what we can do in space todaywith robotics."

Each of Dextre's seven-jointedarms will possess a "hand" ? an orbital replacement unit ? backedby a sensor sensitive to less than 1 pound (0.5 kilogram) of force, or aboutthe weight of a small water bottle. The device will use a suite of tools toreplace burned-out components outside the ISS, as well as assist spacewalkerswith their duties.

Japan's JLP module willserve primarily as attic space for the three-part Kibo science laboratory whenit's finished some time in 2009. Initially, however, the 9.2-ton cylindricalroom will be used to ferry eight systems and science experiment racks to theISS.

"I feel it?s a littlebit small inside," said Japanese astronaut Takao Doi, noting that themodule was slightly larger than a smallwalk-in closet. "As you know this is a module for storagepurposes." Doi, an STS-123 mission specialist representing the JapanAerospace Exploration Agency (JAXA), will deliver the new room to the ISS usingEndeavour's robotic arm.

The module, to be followedby a "back porch" exposed to space and a school bus-sized sciencelab, is part of Japan's 680 billion yen ($6.6 billion) space station scienceinitiative, JAXA officials have said.

Gorie and his crew'santicipated 16-day journey in space will be the longestever attempted for a space station assembly mission to date.

Editor's Note: This story has been updated to include the correct cost of the Dextre robot.