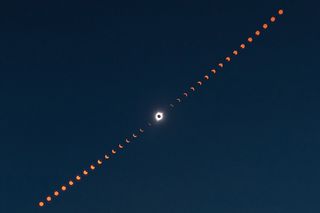 This composite image shows the progression of a total solar eclipse over Madras, Oregon, on Aug. 21, 2017.
(Image: © Aubrey Gemignani/NASA)

A newly released composite photo of the total solar eclipse shows the entire celestial event as it unfolded over Oregon, revealing different phases of the eclipse as the moon blotted out the sun's light.

On Monday (Aug. 21), the moon passed between Earth and the sun, creating a total solar eclipse that was visible along a narrow path that stretched across the contiguous United States, from Oregon to South Carolina.

This eye-catching composite shows the eclipse's progression leading up to and following totality (when the moon completely blocks the sun), as viewed from Madras, Oregon. [See More Amazing Shots of the 2017 Total Solar Eclipse]

It had been 99 years since a total solar eclipse last swept across the contiguous United States. This time around, the so-called path of totality measured about 70 miles (113 kilometers) wide and cut through 14 states, including parts of Oregon, Idaho, Wyoming, Nebraska, Missouri, Illinois, Kentucky, Tennessee, Georgia and South Carolina. Elsewhere in the country, and across the entire North American continent, spectators were treated to a partial eclipse of the sun.

But the so-called Great American Solar Eclipse wasn't just viewed from the ground. Satellites in orbit, astronauts aboard the International Space Station, high-altitude research balloons and even airplanes caught glimpses of celestial show.

For anyone who missed the 2017 eclipse, another total solar eclipse will sweep across America in seven years. On April 8, 2024, the moon will cast a shadow across Mexico and the U.S., with a path of totality that crosses Texas and extends northeast through Maine.This photo, taken from aboard a NASA Gulfstream III aircraft, shows what's known as the "diamond ring effect," which occurs in the moments before totality, as the last of the sun's rays shine through the valleys on the moon's limb. During this phase of the eclipse, the sun's outermost atmosphere, or the solar corona, starts to become visible, creating an effect that looks like a ring embellished with sparkling diamonds.