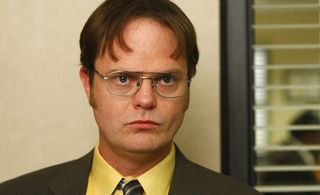 Rainn Wilson - best known as Dwight Schrute from NBC's The Office - has been cast as Harry Mudd in CBS's Star Trek: Discovery. The show's official Twitter announced the casting with this brief video:

Since Star Trek: Discovery takes place in the Prime timeline (meaning the original TV shows and and not the recent film reboot's 'Kelvin' timeline), this would be a re-casting from the role's original actor, Roger C. Carmel. Carmel played Mudd in both the 1960s live-action Star Trek series as well as the 1970s animated show. There were plans for Mudd to be revived in Star Trek: The Next Generation, but it ultimately never happened.

After several deays, CBS has yet to give an updated debut date for the Star Trek: Discovery series.