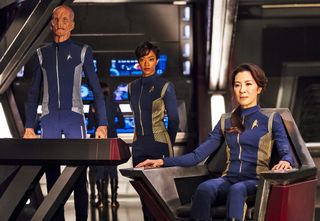 The first full trailer for CBS's Star Trek: Discovery has been released. In the two-plus-minute trailer, it establishes exactly when it takes place in the timeline, as well as the level of special effects they're aiming for. And oh yeah, there's lens flares.

Star Trek: Discovery is now planned to debut in the fall on CBS, then segue over to CBS All Access for the remainder of its run. CBS All Access is CBS's digital streaming arm with subscriptions starting at $5.99 a month with limited commercials.