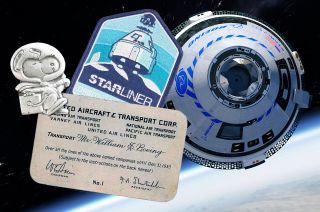 The first launch of Boeing's commercial crew spacecraft is carrying with it the promise of a new era for U.S. human spaceflight — and a small payload of commemorative items to mark the milestone.

The Boeing Company's CST-100 Starliner capsule is set to embark on its maiden mission to the International Space Station. The uncrewed Orbital Flight Test (OFT) is designed to demonstrate that the spacecraft is ready to fly astronauts and cargo as contracted by NASA.

The Starliner OFT is scheduled to launch atop a United Launch Alliance (ULA) Atlas V rocket from Complex 41 at Cape Canaveral Air Force Station in Florida at 6:36 a.m. EST (1136 GMT) on Friday (Dec. 20). After spending a week docked to the orbiting laboratory, the capsule will return to Earth for a parachute- and airbag-assisted landing at the White Sands Missile Range in New Mexico.

Strapped into a seat on board the Starliner is an anthropometric test device, an instrumented mannequin, which has been dressed in the same style Boeing blue spacesuit that future Starliner crew members will wear. Boeing also gave it a red and white polka dot bandana and named it Rosie after "Rosie the Riveter," the World War II icon who represented the women working in factories and shipyards.

"[Rosie is] flying for everyone on our team who took on the challenge of human spaceflight and said, 'We can do it,'" said Boeing in a statement.

Rosie's spacesuit is adorned with an embroidered OFT mission patch. Similar patches are packed aboard the Starliner to be distributed to the teams around the United States that played a role in the spacecraft's development and in NASA's Commercial Crew Program. Other items packed on the flight include Starliner coins and program decals.

By flying mementos for its team members, Boeing is continuing a tradition that dates back to the beginning of U.S. human spaceflight. The first astronaut to enter space, Alan Shepard, flew the first of hundreds of thousands of American flags that have traveled to space on American spacecraft over the past 60 years.

Boeing's Starliner is set to add to that number, carrying hundreds of U.S. flags on its orbital debut.

"The Starliner teams at NASA's Kennedy Space Center, Johnson Space Center and across the nation will get one of these smalls flags from the Starliner Orbital Flight Test cargo for their efforts to return the U.S. to human space launch as part of the Commercial Crew program," described Boeing on Twitter.

Also on board Starliner is a package that borrows from a NASA astronaut's legacy.

Apollo 14 command module pilot Stu Roosa took 500 seeds from five different types of trees — loblolly pine, sycamore, sweetgum, redwood and Douglas fir — on his 1971 journey to the moon. Once back on Earth, the U.S. Forest Service germinated the seeds and then sent them around the nation to be planted. They eventually became known as the "moon trees."

"In honor of those first space trees, Boeing's CST-100 Starliner will carry the same mix of seeds on its first flight test to low Earth orbit," the company said. "When the seeds return, they'll be distributed to Boeing sites, suppliers and other stakeholders across the country, growing the first generation of Starliner trees."

By air or by beagle

As Boeing's customer, NASA is flying a small allotment of patches and flags that represent the U.S. space agency and its international partners that make up the space station program. NASA's cargo also includes a number of lapel pins in the shape of Charles Schulz's "world famous" comic strip dog.

"The revered symbol of safety in human spaceflight, dozens of Silver Snoopy pins will be packed inside Starliner's cargo bags to orbit the Earth and return at the end of the mission. The small items depict the beloved American beagle happily wearing a spacesuit," said Boeing.

NASA astronauts will later award the flown lapel pins to space program employees whose work has led to mission safety and success.

To represent its own commitment to safety, Boeing has packed aboard Starliner its founder and namesake's original identification card for air travel.

"Bill Boeing was inspired to build aircraft long before there was a known market for them," Boeing stated. "From the start, he committed his company to 'build it better,' and that high standard has guided the company's thousands of employees for more than 100 years."

This identification card, which is numbered "1," bears Bill Boeing's signature. It was issued to him in 1933 to use for any flight by the United Airlines and Transport Corporation, the precursor of United Airlines. Normally stored in The Boeing Company archives, the ID card will travel aboard Starliner as a bridge between the company's aviation past and future in human spaceflight.