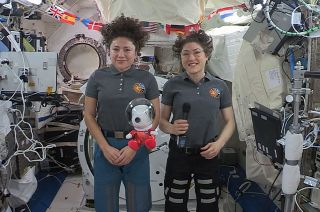 Snoopy, "the world famous astronaut," has reached new heights — above the streets of New York City and aboard the International Space Station.

The Peanuts comic strip beagle took flight in real life on Thursday (Nov. 28), as a new, NASA-inspired giant balloon in the Macy's Thanksgiving Day Parade and as a plush doll floating aboard the orbiting laboratory. NASA crew members Jessica Meir and Christina Koch from on board the space station revealed the Astronaut Snoopy doll in a video shown as part of NBC's television coverage of the holiday celebration.

"Snoopy has been along for space rides since the Apollo era. Today, he's floating in the Macy's parade and here in space," said Meir during the NBC broadcast.

Both the 49-foot-tall (15-meter) helium balloon and 8-inch-tall (20-centimeter) fabric doll sported bright orange spacesuits with the NASA insignia, red-soled boots and bubble helmet, as modeled after NASA's Orion Crew Survival System to be worn by astronauts on future Artemis missions to the moon and Mars.

"Join us next for Artemis, NASA's plan to land the first woman and next man on the Moon, and then onto Mars," said Meir, who with Koch conducted the first all-female spacewalk in October.

The Astronaut Snoopy doll, made by Hallmark, was launched to the space station aboard a Northrop Grumman Cygnus cargo spacecraft last month. The toy's flight was not announced in advance.

Hallmark's taking Snoopy out of this world with this Astronaut Snoopy plush, a miniature version of the giant balloon that debuted in the 2019 Macy's Thanksgiving Day Parade in New York City.
View Deal

"Astronaut Snoopy is headed to the space station for some quality some with Jessica Meir and Christina Koch. More to come so stayed tuned!" wrote Peanuts Worldwide as a tease shared on social media on Nov. 2, the day of the launch.

The Astronaut Snoopy in Macy's parade, which with the other giant character balloons were almost grounded by strong winds, was flown in celebration of the 50th anniversary of the first moon landing. The new balloon extended Snoopy's record as the character with the most appearances and most balloon designs in the event's 93-year history.

Related: Snoopy Boldly Goes to Red Planet in 'A Beagle of Mars'

Snoopy first appeared as an astronaut in the 1969 Macy's Thanksgiving Day Parade, the same year that "Charlie Brown" and "Snoopy" flew to the moon as the names of the Apollo 10 command and lunar modules, followed two months later by the Apollo 11 moon landing.

Joining the Astronaut Snoopy balloon in this year's parade was a Peanuts float featuring Snoopy's bird pal, Woodstock, using a telescope to peer up at his high-flying friend. Also along for the ride was Charlie Brown and two former NASA astronauts, Kay Hire and Janet Kavandi.

The inclusion of Astronaut Snoopy in the parade and the flight aboard the space station were part of a partnership between NASA and Peanuts Worldwide dating back more than 50 years. Since 1968, Snoopy has served the space agency's mascot to promote safety in human spaceflight among its workforce. Astronauts to this day bestow the Silver Snoopy award, a lapel pin based on artwork provided by Charles Schulz, to exceptional employees who contributed to mission success.

In 2018, NASA and Peanuts extended their agreement to use Snoopy and the Peanuts gang to also promote science, technology, engineering and mathematics (STEM) education. New products, a McDonald's Happy Meal and the Apple TV+ animated series "Snoopy in Space" have been focused on engaging children in NASA's space exploration activities.

To that end, NASA is using the Astronaut Snoopy doll on the space station to also draw attention to the upcoming anniversary of the first crew to reside on board the complex in November 2000.

"We're also counting down to 20 years of a continuous human presence on the International Space Station," said Koch, as the Astronaut Snoopy floated between her and Meir.

Click through to collectSPACE to watch Astronaut Snoopy float aboard the space station.