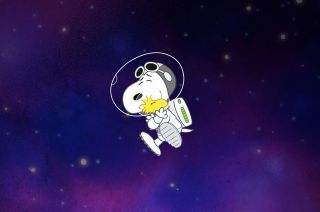 "Snoopy in Space," now available on the Apple TV+ service, follows Snoopy, Woodstock and the whole Peanuts gang as the titular dog pursues his dream of becoming a world-famous astronaut.

"I try to be a responsible dog owner," says Charlie Brown early in the series, "but no one ever tells you what to do when your dog sneaks into a secure government facility so he can try to be an astronaut."

In real life, Snoopy is no stranger around NASA. Adopted by the space agency as a safety mascot in 1968, astronauts to this day award "Silver Snoopy" lapel pins to NASA employees and contractors whose contributions to the space program have contributed to human safety or mission success.

Snoopy and Charlie Brown even flew to the moon as the namesakes of the Apollo 10 command and lunar modules 50 years ago.

In 2018, NASA and Peanuts Worldwide entered into a new agreement to expand Snoopy's mission at the space agency. Now the beagle and his friends are being used to promote NASA's deep space exploration missions and its efforts to engage students in science, technology, engineering and mathematics (STEM).

"One of the big tentpoles of this partnership is to do a collection of animated content" Stephanie Betts, executive vice president of content at DHX Media, the parent company of Peanuts Worldwide, said at the 2018 San Diego Comic-Con. "We want this content to be what inspires the next generation to be interested in STEM, not just as an interest but also hopefully to pursue down the road as a career."

As "Snoopy in Space" begins, Snoopy takes off on one of his imaginary adventures as the Flying Ace when a Saturn V rocket zooms by. After falling back to Earth — or rather falling off his red doghouse — and discovering the rocket was part of a space-themed play being put on by the Peanuts gang, Snoopy decides to apply to NASA to become an astronaut.

Along the way, the gang meets NASA's "Computerized Astronaut Recruitment Advisor," or C.A.R.A., and volunteer to serve in Mission Control as Snoopy and Woodstock set their sights on missions to the International Space Station, the moon and maybe even Mars.

With a total running time of 96 minutes divided into 12 "missions" (or episodes) each 8 minutes long, "Snoopy in Space" combines classic Peanuts-style humor with educational lessons about space exploration and astronomy. Aimed at a young audience but with enough nostalgia to engage Peanuts and space fans of all ages, viewers learn about how NASA trains its astronauts, why it operates a space station, the scientific value of exploring the moon and why Mars is the next destination for human- and beagle-kind.

"Snoopy in Space" also pays tribute to NASA's past, with nods to real astronauts and missions, while featuring the agency's new generation of spacecraft, including the Space Launch System (SLS) rocket and Orion crew capsule.

All 12 episodes of "Snoopy in Space" are available to stream on Apple TV+ now. A related Design Lab, "Draw Your Astronaut Inspired by 'Snoopy in Space,'" is being offered at select Apple Stores.

Click through to collectSPACE to watch a clip from "Snoopy in Space."