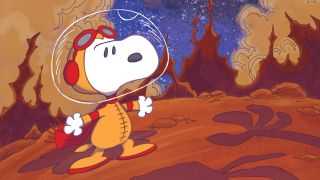 Snoopy boldly goes to the Red Planet in the new graphic novel "Snoopy: A Beagle of Mars" from Boom! Studios.
(Image: © Boom! Studios)

On Dec. 18, Peanuts' Snoopy will follow in the pawprints of the Russian cosmonaut Laika and venture into space - but go where no beagle has gone before: Mars.

In the original graphic novel (OGN) "Snoopy: A Beagle of Mars," Charles M. Schulz' loveable canine goes on what BOOM! Studios calls "his grandest adventure yet!"

This graphic novel touches on a long association Peanuts - and Snoopy in particular - has had with outer space. The lunar module and command module of the historic 1969 Apollo 10 mission were named after Snoopy and Charlie Brown. That same year, NASA started an annual Silver Snoopy Award given out to employees for "outstanding achievements related to human flight safety or mission success."

In 2018, Peanuts Worldwide and NASA re-doubled their partnership with the Space Act Agreement, an effort to inspire space exploration and STEM education among students.

"In 'Snoopy: A Beagle of Mars,' Snoopy, the world-famous astronaut, heads to the stars in his most out-of-this-world adventure yet!" reads BOOM!'s description of the OGN. "What mysteries does the red planet hold? Will he find water? Will he find life?  Will he find the time to get in a quick nine holes? Snoopy grabs his golf clubs and blasts off for Mars in this original graphic novel from the world of Charles M. Schulz and Peanuts!"

"Snoopy: A Beagle of Mars" is written by Jason Cooper, with art from Robert Pope and Hannah White. Scroll down for a preview of the upcoming graphic novel.

"Snoopy: A Beagle on Mars" from Boom! Studios will be available on Dec. 18.