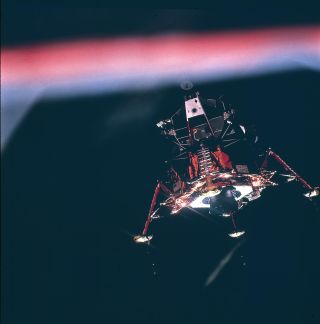 No seats? No problem. Throwing away seating was just one of the innovative design compromises NASA made to get astronauts safely on the lunar surface for the first time on July 20, 1969.

Neil Armstrong and Buzz Aldrin softly landed on the Sea of Tranquility 50 years ago this month inside the lunar module. This spacecraft was like nothing anyone had seen before. Instead of smooth sides, there were bumps and jagged edges and antennas. The shape was so strange that the Apollo 9 crew called their lunar module "Spider," because of the outstretched legs that made it look like a creepy-crawly creature.

Why the strange shape? It was a weight-saving measure, pointed out Dick Dunne. Starting his career as a riveter for Grumman Aircraft Engineering (which became known as Grumman Aerospace and is now called Northrop Grumman), Dunn eventually worked his way up to a senior position in public affairs before retiring. "If we could get an ounce off, we were happy," he told Space.com.

While the spacecraft might have gotten some second looks, it more than proved its worth. It safely brought astronauts to the moon's surface and returned them to the main spacecraft, the command module, six times between 1969 and 1972, with only a few hiccups. (The most famous was a pair of computer overload errors during the Apollo 11 landing, but each one was only a warning — the Eagle spacecraft did touch down safely with adept pilot Armstrong at the controls.)

And the lunar module ended up saving the lives of the Apollo 13 crewmembers in 1970, after an explosion badly damaged their command module. Assuming that the command module's main engine was crippled, engineers at Grumman along with NASA's mission control implemented a pre-existing plan to use the lunar module to get the astronauts home.

During Apollo 13, the spidery spacecraft's engine was fired multiple times to bring the astronauts safely around the moon and toward Earth. During the four days that followed the explosion, the astronauts treated the lunar module as a lifeboat, using the lunar module's healthy oxygen and water supplies to supplement the badly damaged ones in the command module. The astronauts were uncomfortable and cold, since power and heating usage had to be kept to a minimum, but they made it home safely.

Long before the development of the lunar module, NASA was thinking about how best to carry its astronauts to the moon. Simply speaking, the agency considered three main scenarios: build a giant rocket to blast astronauts directly to the moon; arrange for two spacecraft to meet up in Earth orbit; or go for a more innovative concept called lunar orbit rendezvous, which was ultimately the winner.

In a lunar orbit rendezvous, two vehicles would travel together to the moon, then separate. One would stay in orbit while the other would land on the surface and return to orbit again. The process would save NASA energy and fuel, its champion John Houbolt of NASA's Langley Research Center in Virginia argued, but it took two and a half years to convince upper management. He once called himself "a voice in the wilderness" in a letter to NASA's associate administrator. Grumman was also studying the option.

When NASA chose the lunar orbit rendezvous option, the agency needed a whole new kind of spacecraft — one that would only ever operate in space. In the early 1960s, this was hard to imagine — all spacecraft designed to date were supposed to be able to bring astronauts into space and safely home through Earth's atmosphere. These spacecraft were shaped like smooth cones, with blunt heat shields to take the brunt of the heating they would undergo reentering Earth's atmosphere.

Grumman received the contract to build the lunar module in 1962 and had to innovate quickly. The huge Saturn V rocket, which had to heft two spacecraft into orbit, could only handle so much mass.

Dunne recalled that one early design for the lunar module looked like "two balls on top of each other," which included "a lot of glass" on the ascent stage. But glass is heavy, as are seats and smooth lines — and everything else that spacecraft designers were used to.

So they threw it all away. Over many iterations, the large glass windows evolved into small, triangular portholes. The seats disappeared on the presumption that astronauts would only need to stand briefly during landing; on the surface, they would sleep in lightweight hammocks.

The lander's exterior changed, too. They removed an extra docking port. In places, the "skin" of the lunar module thinned to only a few layers, since a pressurized spacecraft made for space wouldn't need a lot of protection. And the smooth sides vanished, replaced by the bumpy and functional form historians and spaceflight fans are familiar with today.

The first lunar module rocketed to space without a crew on Jan. 22, 1968, during Apollo 5. The flight took place later than everyone expected — developing this new type of spacecraft came with its share of delays. But the lunar module worked reasonably well in orbit, beyond some issues during its descent-stage testing. NASA had planned a second uncrewed test, but the agency decided to skip it.

However, further delays with the lunar module's development influenced spaceflight history. The crewed Apollo 8 mission was supposed to test the lunar module in Earth orbit, but NASA wasn't yet confident the spacecraft would thrive. Faced with rumors the Soviet Union might soon try to fly around the moon, NASA changed the mission plan, taking the lunar module off the flight. Instead, Apollo 8 orbited the moon, making that crew the first humans to see the lunar surface up close, in late December 1968.

Crewed lunar module testing finally went ahead with Apollo 9 in early 1969, when the lunar and command modules successfully undocked and redocked in Earth orbit. The lunar module's ability to land was then tested on Apollo 10, which brought the spacecraft to within 50,000 feet of the lunar surface. The crew had flipped a switch the wrong way, which caused the lunar module to unexpectedly begin "searching" for the command module and spinning above the surface for a few seconds, but the crew quickly regained control.

The lunar module proved its worth with safe descents for Apollos 11, 12 and 14, as well as saving the astronauts after the Apollo 13 explosion. During its last three missions — Apollos 15, 16 and 17 — the lunar module carried a rover to the surface so that the astronauts could cover more ground. This addition required no major design changes besides slightly enlarging a cargo bay to accommodate the folded-up lunar rover, according to Dunne. "When it got to the moon, they let [the rover] out of its cave, if you will, and it snapped into place," he said.

The lunar module was hardly the end of Grumman's work in civilian spaceflight, nor of NASA's experience navigating serious delays. Today, Northrop Grumman is manufacturing the solid rocket boosters that will help lift the massive Space Launch System (SLS) rocket on its first uncrewed trip around the moon in 2020 or so and is the prime contractor for the James Webb Space Telescope, which is scheduled to launch in 2021.