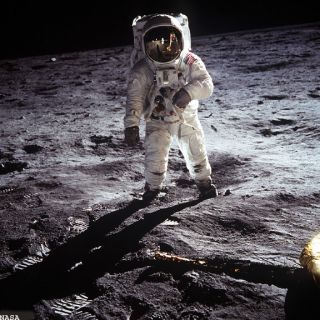 Buzz Aldrin seen near the leg of the Lunar Module (LM) "Eagle" during the Apollo 11 extravehicular activity (EVA). Neil Armstrong, whose reflection is seen in Aldrin’s facemask, took this photograph.
(Image: © NASA)

Editor's Note: This account of the moments before the Apollo 11 mission's lunar liftoff was provided today by NASA. See also our Special Report on the 40th anniversary of the historic event.

Neil Armstrong was supposed to be asleep. The moonwalking was done. The moon rocks were stowed away. His ship was ready for departure. In just a few hours, the Eagle's ascent module would blast off the Moon, something no ship had ever attempted before, and Neil needed his wits about him. He curled up on the Eagle's engine cover and closed his eyes.

But he could not sleep.

Neither could Buzz Aldrin. In the cramped lander, Buzz had the sweet spot, the floor. He stretched out as much as he could in his spacesuit and closed his eyes. Nothing happened. On a day like this, what else could you expect...?

July 20, 1969: The day began on the farside of the Moon. Armstrong, Aldrin and crewmate Mike Collins flew their spaceship 60 miles above the cratered wasteland. No one on Earth can see the Moon's farside. Even today it remains a land of considerable mystery, but the astronauts had no time for sight-seeing. Collins pressed a button, activating a set of springs, and the spaceship split in two. The half named Columbia, with Collins on board, would remain in orbit. The other half, the Eagle, spiraled over the horizon toward the Sea of Tranquillity.

"You are Go for powered descent," Houston radioed, and the Eagle's engine fired mightily. The bug-shaped Eagle was so fragile a child could poke a hole through its gold foil exterior. Jagged moonrocks could do much worse. So when Armstrong saw that the computer was guiding them into a boulder field, he quickly took control. The Eagle pitched forward and sailed over the rocks.

Meanwhile, alarms were ringing in the background.

"Program alarm," announced Armstrong. "It's a 1202." The code was so obscure, almost no one knew what it meant. Should they abort? Should they land? "What is it?" he insisted.

Scrambling back in Houston, a young engineer named Steve Bales produced the answer: The radar guidance system was pestering the computer with too many interruptions. No problem. "We've got you..." radioed Houston. "We're Go on that alarm."

And on they went. Things, however, were not going exactly as planned. The Sea of Tranquillity was supposed to be smooth, but it didn't look so smooth from the cockpit of the Eagle. Armstrong scanned the jumbled mare for a safe place to land. "60 seconds," radioed Houston. "30 seconds." Mission control was hushed as the telemetry came in. Soon, too soon, the ship would run out of fuel.

Capcom later claimed the "boys in mission control were turning blue" when Armstrong announced "I [found] a good spot." As for Armstrong, his heart was thumping 156 beats per minute according to bio-sensors. The fuel gauge read only 5.6% when the Eagle finally settled onto the floor of the Sea of Tranquillity.

Houston (relieved): "We copy you down, Eagle."

Armstrong (coolly): "Houston, Tranquility Base here. The Eagle has landed."

Immediately, they prepared to leave. This was NASA being cautious. No one had ever landed on the Moon before. What if a footpad started sinking into the moondust, or the Eagle sprung a leak? While Neil and Buzz made ready to blast off, Houston read the telemetry looking for signs of trouble. There were none, and three hours after touchdown, finally, Houston gave the "okay." The moonwalk was on.

At 9:56 p.m. EDT, Neil descended the ladder and took "one small step" (left foot first) into history. From the shadow of the Eagle, he looked around: "It has a stark beauty all its own--like the high desert of the United States." Houston reminded him to gather the "contingency sample," and Neil put some rocks and soil in his pocket. If, for any reason, the astronauts had to take off in a hurry, scientists back on Earth would get at least a pocketful of the Moon for their experiments.

Soon, Buzz joined him. "Beautiful view!" he exclaimed when he reached the lander's broad footpad. "Isn't that something!" agreed Armstrong. "Magnificent sight out here."

Those two words summed up the yin-yang of the Moon. The impact craters, the toppled boulders, the layers of moondust--it was utterly alien. Yet Tranquillity Base felt curiously familiar, like home. Apollo astronauts on subsequent missions had similar feelings. Maybe this comes from staring at the Moon so often from Earth. Or maybe it's because the Moon is a piece of Earth, spun off our young planet billions of years ago. No one knows; it just is.

Truly, much of the scene was weird. The airless landscape jumped out at the astronauts with disconcerting clarity and, as a result, the horizon felt unnaturally close. The whole world seemed to curve, a side-effect of the Moon's short thousand-mile radius. "Distances [here] are deceiving," noted Aldrin.

The sky was equally baffling. Although the Eagle had landed on a bright lunar morning, the sky was as black as midnight. An astronomer's paradise? No. Not a single star was visible. The glaring, sunlit ground ruined the astronaut's night vision. Only Earth itself was bright enough to be seen, luminous blue and white, hanging overhead.

Armstrong was particularly fascinated by moondust, which he kicked and scuffed with his boots. On Earth, kicking dust makes a little cloud in the air--but there is no air on the Moon. "When you kick the surface, [the dust goes out in] a little fan which, to me, is in the shape of a rose petal," recalls Armstrong. "There's just a little ring of particles--nothing behind 'em--no dust, no swirl, no nothing. It's really unique."

Enough of that. It was time for work.

Almost forgotten in Apollo lore are the checklists sewn to the forearms of the spacesuits. These "honey-do" memos from NASA were jam-packed with activities--from inspecting the lander to deploying the TV to collecting samples. Some of the tasks were as detailed as bending over and reporting to Mission Control how it went. They had a lot to do.

Neil and Buzz deployed a solar wind collector, a seismometer and a laser retroreflector. They erected a flag and uncovered a plaque proclaiming, "We came in peace for all mankind." They took the first interplanetary phone call--"I just can't tell you how proud we all are," said President Nixon from the Oval Office. They collected 47 lbs of moon rocks and took 166 pictures. Check. Check. Check.

Right: Buzz Aldrin totes experiments from the Eagle onto the lunar surface.

Finally, after two and a half busy, exhilarating hours, it was time to go. The checklist continued: Climb back in the Eagle. Stow the rocks. Eat dinner: Beef stew or cream of chicken soup. And finally, sleep.

That was the limit. "You just are not going to get any sleep while you're waiting [for liftoff]," Aldrin said after the mission.

The Eagle was not a sleepy place. The tiny cabin was noisy with pumps and bright with warning lights that couldn't be dimmed. Even the window shades were glowing, illuminated by intense sunshine outside. "After I got into my sleep stage and all settled down, I realized there was something else [bothering me]," said Armstrong. The Eagle had an optical telescope sticking out periscope-style. "Earth was shining right through the telescope into my eye. It was like a light bulb."

To get some relief, they closed the helmets of their spacesuits. It was quiet inside and they "wouldn't be breathing all the dust" they had tramped in after the moon walk, said Aldrin. Alas, it didn't work. The suit's cooling systems, so necessary out on the scorching lunar surface, were too cold for sleeping inside the Eagle. The best Aldrin managed was a "couple hours of mentally fitful drowsing." Armstrong simply stayed awake.

When the wake-up call finally came,

"Good morning, Houston. Tranquility Base. Over."

It was time to go home, to Earth, for a good night's sleep.