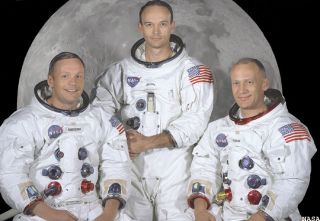 >>> Forty years after Apollo 11 astronauts first set foot on the moon on July 20, 1969, SPACE.com examines what we've done since and whether America has the right stuff to get back to the moon by 2020 and reach beyond. In a series of never-before-seen video and interviews, you'll hear from the brave men who went and the people who shape the space industry today.

GALLERY / THE MISSION / WHERE WERE YOU?

A Note from Neil Armstrong
The Apollo 11 commander recalls the heyday of the Space Race in 1969 that led up to his historic first steps on the moon.

Video: The Meaning of Apollo
Neil Armstrong and other Apollo astronauts reflect on the project with thoughts personal and profound, on risk, fame, and what's next for the moon.

Neil deGrasse Tyson Interview
The astronomer worries that Americans view spaceflight as a luxury rather than a fundamental science driver. "The trend lines in research and innovation look good for places such as India and China and less good for America as we go forward."

Video: Apollo 7 and 9
The missions that brought NASA and the U.S. steps closer to the first moon landing.

Steve Squyres Interview
The Mars rover scientist discusses the benefits of manned and unmanned exploration of the moon and Mars.

Video: The First Men Around the Moon
A retrospective of the landmark 1968 flight of Apollo 8.

Moon Rovers: Then, Now, Next
Tomorrow's rovers will be like luxury RVs compared to the first rickety moon buggy.

Moon Suits: Then, Now, Next
The first spacesuits were designed before we'd been to the moon. The new ones are far more sophisticated.

Andrew Chaikin: The Moon Still Beckons, But Does Anyone Care?
Given that we're all submerged in a 24/7 onslaught of information in which everything is interrupted by something else, the author of "Voices from the Moon" wonders: If Apollo 11 were happening right now, how long would we pay attention?

Video: Almost There
The Apollo 10 mission ironed out the final kinks in NASA's plans to land the first humans on the moon.

Moon Capsules: Then, Now, Next
How has the moon capsule changed from the Apollo program to the new Orion moon program.

Video: The Eagle Has Landed
A look back at the first manned moon landing by astronauts Neil Armstrong and Buzz Aldrin.

President Nixon Was Prepared for Apollo Disaster
Tucked away in the National Archives the speech written for Nixon for the historic lunar landing on July 20, 1969, but one he never hoped to read.

Michael Collins Interview
The astronaut who orbited the moon while Armstrong and Aldrin set foot on it explain what it was like to be the third member of the Apollo 11 team.

MONDAY 7/20 (Anniversary of the Landing)

If We Could Put a Man on the Moon ...
... back when eight-track tapes were state of the art, why is it so hard to do it again? Heck, it's just rocket science, after all. Among the challenges: NASA now aims to try and do it cheaper and safer.

Peter Diamandis Interview
The X Prize founder Peter Diamandis talks about the "disconnect between the future that was thought possible after the success of Apollo and where we are today," and he looks ahead to the future of private lunar exploration with the Google Lunar X Prize.

40 Years from Now
NASA hopes to return astronauts to the lunar surface by 2020 and there's a vague vision to go on to Mars and elsewhere after that. Industry insiders and luminaries weigh in on how far humanity's reach should extend in the next four decades, by 2050. >>>