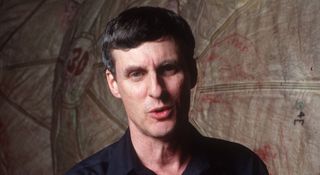 Steven W. Squyres is a professor of astronomy at Cornell University, Ithaca, N.Y., and the principal investigator for the science payload on NASA's Mars Exploration Rovers.
(Image: © NASA/JPL)

Fortyyears after the first moon landing on July 20, 1969, SPACE.com asked Apolloastronauts and leaders of the space community to ponder the past, present andfuture. Steve Squyres, lead scientist for the Mars Exploration Rover Projectand a professor at Cornell University, is an avid fan of human spaceflightthough he works on one of the most successful robotic missions to space, and isoptimistic about humanity's chances of getting back to the moon - and even toMars - in the coming decades:

SPACE.com: Did the Apollo mission have a big impact on you?

Squyres: Oh, yeah, of course it did. I mean,it was one of the keyhistoric events of my formative years. And there are several missions Iparticularly remember. I remember John Glenn's flight very well, though I wasonly 6 years old at the time. I remember Apollo 11 vividly. I remember Apollo8; Apollo 8, that was the first time that humans went to the moon, and Iremember being at my grandparent's place on Christmas Eve, and then listeningto the astronauts read from the book of Genesis. It was a very stirring, verymoving sort of thing. So, yeah, I would say that all of those things capturedmy imagination, got me very interested in space exploration.

S: What do think of the directionthat space exploration took between Apollo and now?

Sqyures: Well, there has been a period thatwe've gone through since Apollo, where we've focused on doing things inlow-Earth orbit. I think that makes a certain amount of sense, because the nextleap beyond going to the moon is a very big one.

I am veryexcited at the prospect of astronauts not just going backto the moon, but in the near future I hope, going on to explore near-Earthasteroids, going on to explore Mars and so forth. And so what I'm looking to isthe future and hopefully, I want to see during my lifetime, astronauts not justback at the moon, but at asteroids. I'm hoping to see that.

S: Do you think that that mightactually happen?

Squyres: Yeah, yeah, absolutely, absolutely.It's going to require a substantial commitment of resources - these things aredifficult to do and they are expensive to do, but they're certainly technicallywithin our grasp. And I think the reasons for sending humans out into deepspace, out to explore these distant targets are sufficiently compelling, andthe benefits are sufficiently great that it's worth doing.

S: So how do you think this effortaffects the manned vs. unmanned mission balance?

Squyres: You know, I'm a robot guy, that'swhat I have spent most of my career doing, but I'm actually a very strongsupporter of human spaceflight. I believe that the most successful explorationis going to be carried out by humans, not by robots.

What Spiritand Opportunity have done in 51/2 years on Mars, you and I could have done in a good week. Humans have away to deal with surprises, to improvise, to change their plans on the spot.All you've got to do is look at the latest Hubble mission to see that.

And one ofthe most important points I think: humans have a key ability to inspire, thatrobots do not. Somebody once famously said, ' Nobody's ever going to give arobot a ticker tape parade,' and there's something to that.

Justdrawing from my own experience, many of the other people who worked on buildingthe MER rovers, and who work on operating them today, are people who grew up duringthe '60s, like me, watching Mercury and Gemini and Apollo on TV as kids anddreaming of sending spaceships to Mars someday. And now we do it.

And there'sgoing to be another generation of kids that are going to watch astronauts goback to the moon, go to asteroids, go to Mars, and be inspired to do incrediblethings that we can't even dream of right now.

S: What do you think will be thenecessary impetus to get us back to the moon and beyond?

Squyres: Well, I think we have the impetus.I think the desire to explore, the imperative to continue to do what NASA isdoing in space, I think that impetus exists. It's a matter of ensuring that wehave the necessary resources, because it's expensive stuff, and having a viableplan for getting the job done. And that's going to be the kind of thing thatthe next NASA administrator, the Obama administration, the Senate and the Houseof Representatives is going to have to work out.

S: Do you think it can be done byNASA alone, or will it take other countries' programs or private spaceflight todo it this time around?

Squyres: For one, I think that NASA can doit alone. NASA certainly has the technical competence to go it alone. Whetherthey should go it alone or not is another question. There can be some benefit todoing things internationally ? I think the space station vividly shows that.

Now as faras commercial stuff is concerned, boy, I would love to see more commercialactivities, more commercial development of space. I think there's enormouspotential there. Now you have to exercise that potential very, very carefully.When you send humans into space, mission success and crew safety are paramount? those cannot be compromised. And so using the COTS [CommercialOrbital Transportation Services] program as its being used right nowinitially to start by launching cargo, and let the commercial entities developa solid track record of launch vehicle success launching cargo into space first,before you move on to talking about humans, I think is an appropriate way togo.

S: One of the big questions seemsto be whether or not we as a country, or a planet, want to go back to the moonand beyond.

Squyres: I sense when I talk to people - Igo out and give talks a lot - that there's still a lot of excitement aboutspace, about the places we can go. I'm an unashamed enthusiast for spaceexploration - always have been since I was a little boy watching John Glenn onTV when I was six, and always will be - and that's the way I look at it.