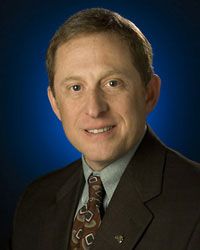 Planetary scientist S. Alan Stern, former Assistant Administrator for the Science Mission Directorate. He resigned in 2008, but is still the Principal investigator for the New Horizons mission to Pluto. Photo
(Image: © NASA/Bill Ingalls.)

Fortyyears after the first moon landing on July 20, 1969, SPACE.com asked Apolloastronauts and leaders of the space community to ponder the past, present andfuture. Planetary scientist Alan Stern, a former NASA associate administrator for the Science Mission Directorate, forecasts that humans will make it backto the moon in the coming decades and that space travel will be something thateveryone (even himself) will do:

SPACE.com: What do you remember of the Apollo11 moon landing?

Stern: Well, I remember it very vividly.At the timeof Apollo 11, I was a grade-schooler, and I remember every time an Apollomission would take place that, like a lot of little boys, I'd gather in frontof the TV for hours and hours and hours with my little brother. And I justremember thinking that this was larger than life; that it was unbelievable thatsomething of this scale of magnitude was taking place. Because even then, itwas clear even to a little boy that this was really historic and that, becauseI was interested in science, that the potential for science was so great.

S: Howdo you try to explain what this time was like to younger generations? Is thereany analogue for them?

Stern: I don't think there is an analogue.I haven't seen something equivalent in its depth and historic importance and theway that it could excite school kids.

I think ifyou were between maybe 6 and 16 there was nothing like Apollo, and I wonder ifthere can be something like that again. We'll just have to see.

S: I wasgoing to ask if you thought there could be another Apollo.

Stern: I think that the oncomingrevolution in humanspaceflight, commercial human spaceflight, beginning with suborbitaltourism that will begin a year after next, will really open up spaceflight in awhole new way. It's going to be much more accessible to individuals.

It's beendisappointing that despite all of the nominal accomplishments of what NASA andESA and others have done, that we are still so limited in our capabilitiesrelative to what might have happened following Apollo. Remember, followingApollo, the discussion was to send humans to Mars by 1983, to have bases on themoon, to have a space station with notsix people, after it's been expanded, but more like 60 or 100; for spaceshuttles to fly nearly every week, as opposed to every other month, this beinga jam-packed year.

So the viewfrom the '60s and early '70s of this time now, 40 years later, was soexpansive, relative to where we landed. It's just amazing. I think that thenext 50 years are likely to be much more exciting than the past 40, because Ithink there're so many different human spaceflight systems being developed now.

S: Whydid things slow down - why didn't we follow through on those original goals?

Stern: It was a very unique time; therewas a very unpopular and bloody war going on in Vietnam, there was a lot ofstrife on campuses, a lot of social change taking place, a lot of recognitionof social needs that the country had at the time: war on poverty, war oncancer, the birth of the environmental movement, the beginnings of programslike Medicare. And so across the board there were social concerns, and therewas a strong backlash against military expenditures, and NASA sort of gotwrapped up in that, in a government that, at the time, was trying to balanceits books and having to make tough choices.

That'sreally what became of it, and NASA has never, in fact, space exploration, hasnever really recovered. It hasn't found an equivalent motivation. I'm hopefulthat commercial space exploration will takeoff. To really fuel the spaceflightrevolution will require an investment of hundreds of billions of dollars a year,and I think that's only going to happen in the commercial sector - if there arelarge profits to be made.

S: Doyou think it should be more of a private venture now, in the sense that it hasmore potential to motivate people?

Stern: Well, I actually think that it'sthe government's job to break down the barriers to entry for private enterpriseand that a fine mission for a national space agency, in terms of humanexploration, would be to develop the technologies to the pathfindingexploration. But for private industry to come behind the things thatgovernment's already proven are possible and reduce them to practice. We're nowseeing that in sub-orbitalspaceflight and the beginnings of orbital, low-Earth orbit systems.

Stern: Well I think the killer applicationfor human spaceflight begins with the suborbital industry. I think that whenanyone can fly in space, rather than just those that governments choose to sendin to space, it's going to really revolutionize, not only how we look at it,but it's going to be an accelerant to the desires to have even more of that.

The prices startoff pretty high - it's tens of millions of dollars to fly in space, but thoseprices will come down, and fly sub-orbitally, ticket prices are in the range ofa couple hundred thousand dollars, but those are going to come down a lot to Ithink over time. I expect that 10 years from now, they'll be a fraction ofthat.

And I thinkin 2019, 10 years from now, the 50th anniversary of Apollo 11, sub-orbitalspaceflight should be ubiquitous.

S: Wheredo you think spaceflight should be 40 years from now? And where do you think itactually will be?

Stern: I think by 2050, there will beresearch outposts on the moon, there will have been human missions tonear-Earth asteroids andto Mars; that commercial space travel will be commonplace in Earth orbitand the beginnings of commercial lunar tourism, for example, are likely.

Where wecould be, by contrast, could be much further. There's no reason that wecouldn't be sending human missions, from a technical standpoint, much fartherafield than just to Mars. Because once you develop the infrastructure to go toMars, it's not very different infrastructure required to explore the asteroids,for example, in the asteroid belt, or even to send a human mission as farafield as Saturn - while it's a stretch, it's not the same kind of quantum leapwe need today to go from shuttle to Mars.

S: Ifsub-orbital space tourism becomes cheaper and more common in the next decade,would you go?

Stern: Oh absolutely. I expect to flysub-orbitally a lot. As a researcher, I look forward to being able to do spacescience in a space environment. After all, that's what the shuttle originallypromised, and that's something we expected for space researchers by the 1980s.Ditto for orbital travel.