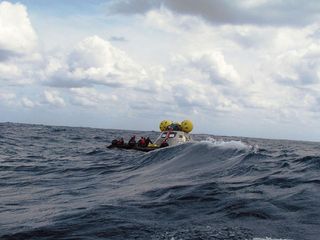 From the outside, NASA's next-generation spacecraft Orion looks a lot like the Apollo spaceship that first took humans to the moon.

Both are rounded cone-shaped capsules, in contrast to the winged space shuttle. But in some ways, the similarities are only skin-deep.

"Visually we are like Apollo, but in terms of state of the art engineering, we are closer to shuttle," said Jim Geffre, a NASA engineer working on Orion, which the agency has tapped to replace its aging space shuttle fleet. "So the reality is we've drawn on a lot of different sources for inspiration."

One of the biggest differences between the Orion Crew Exploration Vehicle and the Apollo Command Module is the electronics inside them.

"The computing power of modern electronics just dwarfs what they had available," Geffre told SPACE.com. "That allows us to do a lot more and build more automation into the spacecraft. More performance that uses less power and less space allows us to build in redundancy that Apollo didn't have."

NASA plans to retire its three space shuttles in 2010 and begin the first operational Orion flights no earlier than 2015.

Another major distinction between the two crew capsules is their size. Orion outstrips the Apollo module, which was only 12.8 feet (about 4 meters) in diameter, compared to Orion's 16.5 feet (5 meters).

That extra room will enable the future spacecraft to carry more people to space. Where Apollo transported three astronauts to the moon - one stayed in orbit while two went down to the surface - Orion will carry four spaceflyers who will each be able to descend to the moon.

Both the Apollo and Orion spacecraft rely on separate lunar landers to ferry moonwalkers to the lunar surface.

The Apollo Lunar Module was launched along with its Command and Service Module aboard a massive Saturn V rocket. The future lunar vehicle, called Altair, is planned to be launched separately from Orion atop an Ares V booster, while the crew capsule will fly on the smaller Ares I rocket. The two new vehicles will rendezvous in low-Earth orbit and travel on to the moon together.

Some design changes have been made to Orion to enable lengthier lunar excursions. While the longest Apollo visit to the moon lasted about 72 hours, future moon trips are planned to last days and even months. That means more supplies must be packed aboard the spacecraft.

"Orion will be more capable in terms of what it can carry - more food, air and water," said John Olson, director of NASA's Exploration Systems Mission Directorate Integration office. "It is going to have updated environmental control and life support systems."

Orion and Altair are designed to be more versatile than the Apollo program's craft, which were built for one purpose: to land on the moon and carry astronauts home.

"Orion is going to enable all kinds of exciting missions," Olson said in a phone interview. "This is our crew exploration vehicle. It'll get us to the space station, the moon and back, and start building toward the missions to Mars."

But packing extra supplies aboard Orion for extended trips means a lot of extra weight, which is difficult and expensive to loft into space. A major challenge for the engineers developing Orion is coming up with creative ways to keep the weight of the spacecraft low.

One way scientists plan to meet the weight requirements is to construct Orion out of new, state-of-the art materials. NASA plans to utilize many new composite materials, such as an aluminum-lithium alloy, as well as modern lightweight titanium, to build the craft.

The scientists working to plan NASA's future on the moon are mindful of the need for modern technology and improvements, though they recognize the debt they owe to earlier Apollo engineers.

"Apollo I think was right for its time," Geffre said. "It met its mission very well. But electronics, materials, the costs of Apollo, those are all things that time and technology have wanted us to improve upon. We are taking advantage of all the effort that was put into designing that vehicle. Where it's appropriate and we can learn lessons or incorporate similar design techniques, we are trying to do that. But in other cases where we do want to improve upon it, we do that as well."

Forty years after astronauts first set foot on the moon, SPACE.com examines what we've done since and whether America has the right stuff to get back to the moon by 2020 and reach beyond. For exclusive interviews and analysis, visit SPACE.com daily through July 20, the anniversary of the historic landing.