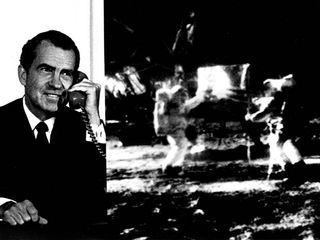 Composite photo of President Richard M. Nixon as he telephoned "Tranquility Base" and astronauts Neil Armstrong and Edwin "Buzz" Aldrin after their historic Apollo 11 moon landing on July 20, 1969.
(Image: © NASA.)

Thetriumphant success of NASA?s Apollo 11 moon landing 40 years ago is a familiarstory to most Americans, but it may be a surprise to some that then-PresidentRichard Nixon was ready for disaster.

Tucked awayin the National Archives the speech written for Nixon for the historiclunar landing on July 20, 1969, but one he never hoped to read. It was acontingency speech, one Nixon would only read if tragedy struck the Apollo 11mission and stranded commander Neil Armstrong and lunar module pilot BuzzAldrin on lunar surface forever while their crewmate Michael Collins circledthe moon in the command module. The speech surfaced about 10 years ago, aroundthe 30th anniversary of the firstmoon landing.?

In his 2001 book ?Almost History,? which chronicles backup plans, speeches anddocuments that were never needed, author Roger Bruns details the origins of theApollo 11 failure speech. They can be traced to astronaut Frank Borman, who commanded the 1968 Apollo 8 mission around the moon, who recommended toNixon speechwriter William Safire that it would be prudent to have a plan incase the Apollo 11 astronauts suffered a very public demise, Bruns explained. ?

Accordingto the plan, Bruns added, Nixon would have called the wives of the Apollo 11astronauts to express his condolences and then give the following speech:

"In their exploration,they stirred the people of the world to feel as one; in their sacrifice, theybind more tightly the brotherhood of man. In ancient days, men looked at starsand saw their heroes in the constellations. In modern times, we do much thesame, but our heroes are epic men of flesh and blood.

"Others will follow,and surely find their way home. Man's search will not be denied. But these menwere the first, and they will remain the foremost in our hearts.

"For every human beingwho looks up at the moon in the nights to come will know that there is somecorner of another world that is forever mankind."

Accordingto Bruns, the stricken Apollo 11 astronauts would then shut down communicationswith Mission Control and there would be a brief ceremony by a clergymancommending their souls to the ?deepest of the deep.? Safire entitled his memocontaining the backup speech ?In the Event of a Moon Disaster.?

Of course,there was no moon disaster and the Apollo 11 astronauts and Nixon spoke withthem by a phone-to-moon link while Armstrong and Aldrin were on the lunarsurface. They lifted off on July 21, 1969 as planned and returned to Earth afew days later. Armstrong, Aldrin and Collins splashed down in the ocean, werequarantined for a short period to make sure they didn?t pick up any cosmicmaladies, then received the star treatment with ticker tape parades and a worldtour.

But thefact that Nixon was prepared for such a tragedy is a reminder of the unknownrisks that faced the first moon explorers, especially as NASA celebrates the 40thanniversary of the Apollo 11 landing and prepares to return astronauts tothe lunar surface by 2020 in new Orion capsules and Altair landers.

Fortyyears after astronauts first set foot on the moon, SPACE.com examines whatwe?ve done since and whether America has the right stuff to get back to themoon by 2020 and reach beyond. For exclusive interviews and analysis, visitSPACE.com daily through July 20, the anniversary of the historic landing. Editor's note: This story was corrected to reflect that astronaut Frank Borman commanded the Apollo 8 mission in 1968.