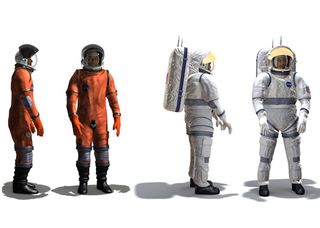 Though they look very different, the two new spacesuits for NASA’s Constellation moon missions will also common elements - such as the helmet and the gloves - that will save weight and space in the Orion crew exploration vehicle and, over time, money.
(Image: © NASA)

The firstspacesuits Apollo astronauts wore on the moon 40 years ago were designed beforehumans ever experienced the lunar environment. While the suits did their joband protected the first moonwalkers from the harshness of space, they left someroom for improvement.

On July 20,1969, Apollo 11 astronauts Neil Armstrong and Buzz Aldrin donned their bulkysuits for the firstmoonwalk in history. It lasted about 2 1/2 hours.

The newspacesuits being designed for NASA's returnto the moon by 2020 as part of the Constellation program are set to be muchmore sophisticated. As second-generation moon suits, they will be sturdier,easier to move around in, and should be able to recycle resources such asoxygen and water.

Many ofthese upgrades will be necessary because when humans revisit the moon, they planto stay longer.

"Oneof the key tenets of this return to the moon and beyond is not to go and checkthings out and go home," said Frank Peri, director of NASA's Exploration TechnologyDevelopment Program at the Langley Research Center in Virginia. "Thefuture of exploration is really different than it was back in the 60s."

Rather thanvisit the moon for hours, as in Apollo, Constellation moon missions are slatedto last days and even months. So the spacesuits will have to withstand a lotmore use.

The suitswill also have to recycle more resources, since the spaceship cannot carry allof the oxygen and water needed for the crew's entire stay.

"Partof the sustainability of living on the moon is going to be how to recycle thesethings," Peri said in a phone interview. "On a three-day jaunt everylittle piece of stuff you bring with you, you've got to use. You can't justfind garbage bins. You've got to be very careful to protect the environment ofthe moon for future generations."

The suitswill have equipment to filter water from sweat and urine back into potabledrinking water, using a similar technique to a system in place on theInternational Space Station. The suits will also have on fuel cells for power.

However,even though the new suits will have many added abilities, they will have to belighter than the current suits in use for spacewalks outside the space station,because of weight limitations on the Orion Crew Exploration Vehicle that theastronauts will ride in.

"Ourbiggest challenge is weight and volume constraint," said Jim Buchli,Constellation Space Suit System program manager at Oceaneering International, acompany that has contracted with NASA to develop the firstConstellation suits. "Typically a suit that provides the protectionyou're looking for is not small. The current EMU [the life support backpackworn by spacewalking astronauts] on station and shuttle is over 300 pounds. Weneed to come way down from there."

A majorlimitation of the Apollo suits was their degradation due to the ubiquitouslunar dust, which wore down many instruments. It had a particularlydamaging effect on the astronauts' spacesuits.

"Thejoints they used were practically on the edge of failure because of thatabrasive dust," Peri said. "We can't tolerate that kind offailure."

The newsuits will be built with new, more dust-resistant materials, with fortifiedjoints to keep out the fine particles.

"You'relikely going to see a suit that is comfortable to wear, fairly lightweight,with maneuverability so you can move within the cockpit of the Orion module andget in and out of the module," Buchli told SPACE.com. "Allthose things to some degree have been provided by earlier suits, but we'reusing new materials that are available and have better capability."

Fortyyears after astronauts first set foot on the moon, SPACE.com examines whatwe?ve done since and whether America has the right stuff to get back to themoon by 2020 and reach beyond. For exclusive interviews and analysis, visitSPACE.com daily through July 20, the anniversary of the historic landing. Editor'snote: This story has been corrected to reflect the effect of abrasive moon duston astronaut equipment.