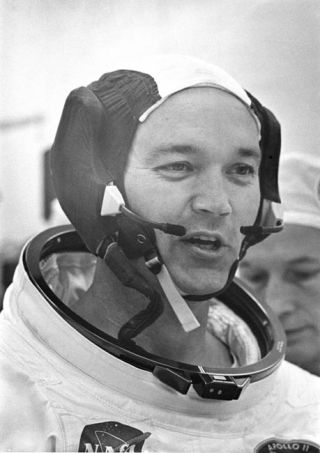 Clad in his spacesuit, Command Module (CM) pilot Michael Collins does a final check of his communications system before the boarding of the Apollo 11 mission on July 16, 1969.
(Image: © NASA.)

Forty years after the first manned moon landing on July 20,1969, SPACE.com asked Apollo astronauts and leaders of the space community toponder the past, present and future. In this prepared statement released by NASA, Apollo 11 command module pilot MichaelCollins says he feels lucky to fly on such a historic flight, but that astronautsare not de facto celebrities or heroes just because of their unique and risky work:

These are questions I am most frequently asked, plus a fewothers I have added. For more information, please consult my book, the 40thanniversary edition of ?Carrying The Fire,? published by Farrar, Straus &Giroux. All of the following sections in quotation marks are from thatreference.

Q. Circling the lonely moon by yourself, the loneliestperson in the universe, weren't you lonely?

"Far from feeling lonely or abandoned, I feel very mucha part of what is taking place on the lunar surface. I know that I would be aliar or a fool if I said that I have the best of the threeApollo 11 seats, but I can say with truth and equanimity that I amperfectly satisfied with the one I have. This venture has been structured forthree men, and I consider my third to be as necessary as either of the othertwo. I don't mean to deny a feeling of solitude. It is there, reinforced by thefact that radio contact with the Earth abruptly cuts off at the instant Idisappear behind the moon, I am alone now, truly alone, and absolutely isolatedfrom any known life.

I am it. If a count were taken, the score would be threebillion plus two over on the other side of the moon, and one plus God knowswhat on this side."

"The cancellation of 014 also freedBorman-Stafford-Collins for reassignment, and reassigned we were, but not as aunit. Tom Stafford moved up a notch and acquired his own highly experiencedcrew, John Young and Gene Cernan; they became McDivitt's back-up. Score one forTom. Borman and Collins got promoted to prime crew of the third manned flight,picking up Bill Anders as our third member.

In the process, Collins also got 'promoted' from lunarmodule pilot to command module pilot, and lost right then and there his firstchance to walkon the surface of the moon. The reason I had to move up was that Deke atthat time had a firm rule that the command module pilot on all flightsinvolving LM must have flown before in space, the idea being that he didn'twant any rookie in the CM by himself. Since Bill and Anders had not flown, Iwas it. Slowly it sunk in. No LM for me, no EVA, no fancy flying, no need topractice in helicopters anymore."

Q. Were you happy with the seat you had?

A.Yes, absolutely. It was an honor.

Q. Has the space program helped young people become interestedin careers in math and science? Don't you tell kids to opt for these choices?

A.Yes and no. We definitely have a national problem in that kids seem to be goingfor money rather than what they consider 'nerdy' careers.

Other countries are outstripping us in the quality andquantity of math and science grads, and this can only hurt in the long run. Buta liberal arts education, particularly English, is a good entry point no matterwhat the later specialization. I usually talk up English.

Q. Turning to your flight, what is your strongest memory ofApollo 11?

A.Looking back at Earth from a great distance.

"I really believe that if the political leaders of theworld could see their planet from a distance of 100,000 miles their outlookcould be fundamentally changed. That all-important border would be invisible,that noisy argument silenced. The tiny globe would continue to turn, serenelyignoring its subdivisions, presenting a unified facade that would cry out forunified understanding, for homogeneous treatment.

Q. That was 40 years ago. Would it look the same today?

A.Yes, from the moon, but appearances can be deceiving. It's certainly notserene, but definitely fragile, and growing more so.

When we flew to the moon, our population was 3 billion;today it has more than doubled and is headed for 8 billion, the experts say. Ido not think this growth is sustainable or healthy. The loss of habitat, thetrashing of oceans, the accumulation of waste products - this is no way totreat a planet.

Q. You are starting to sound a little grumpy. Are yougrumpy?

A.At age 78, yes, in many ways. Some things about current society irritate me,such as the adulation of celebrities and the inflation of heroism.

Heroes abound, and should be revered as such, but don'tcount astronauts among them. We work very hard; wedid our jobs to near perfection, but that was what we had hired on to do.In no way did we meet the criterion of the Congressional Medal of Honor: 'aboveand beyond the call of duty.'

Celebrities? What nonsense, what an empty concept for aperson to be, as my friend the great historian Daniel Boorstin put it,"known for his well-known-ness." How many live-ins, how many trips torehab, maybe--wow--you could even get arrested and then you would really benoticed. Don't get me started.

A.No, no, lucky! Usually, you find yourself either too young or too old to dowhat you really want, but consider: Neil Armstrong was born in 1930, BuzzAldrin 1930, and Mike Collins 1930. We came along at exactly the right time. Wesurvived hazardous careers and we were successful in them. But in my own caseat least, it was 10 percent shrewd planning and 90 percent blind luck. PutLUCKY on my tombstone.

Q. Okay, but getting back to the space program. What's next?

A.I hope Mars. It was my favorite planet as a kid and still is. As celestialbodies go, the moon is not a particularly interesting place, but Mars is. It isthe closest thing to a sister planet that we have found so far. I worry that atNASA's creeping pace, with the emphasis on returningto the moon, Mars may be receding into the distance. That's about all Ihave to say.

Q. I understand you have become a recluse.

A.I'm not sure that's the word. I think of the Brown Recluse, the deadliest ofspiders, and I have a suntan, so perhaps. Anyway, it's true I've never enjoyedthe spotlight, don't know why, maybe it ties in with the celebrity thing.

Q. So, how do you spend your time?

A.A few nature programs, and the Washington Redskins, that's about it.

Q. Do you feel you've gotten enough recognition for youraccomplishments?

Q. Oodles?? But don't you have any keen insights?