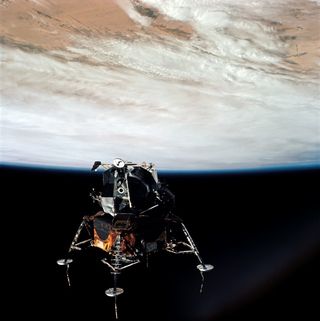 Apollo 9 was an Earth-orbiting mission that tested out the Apollo lunar module for the first time. The lunar module was designed to bring astronauts to the surface of the moon and NASA wanted to ensure that the spacecraft worked well in Earth orbit before testing it at the moon.

The crew included Commander Jim McDivitt, Dave Scott and Russell Schweickart. After a launch on March 3, 1969, the crew spent 10 days in low Earth orbit testing the lunar module's engines, navigation systems and docking maneuvers, as well as backpack life-support systems. And while the module performed well, the astronauts were forced to modify a spacewalk after one of them fell ill during the flight.

McDivitt began his flying career in the U.S. Air Force both in combat and as a test pilot, and joined NASA for the Gemini program. He was part of the Gemini 4 crew during the first-ever U.S. spacewalk by Ed White in 1965, and took pictures that still are widely circulated today.

Scott, also an Air Force pilot and Apollo 9's command module pilot, had one spaceflight under his belt. He was co-pilot on the Gemini 8 mission, which experienced a malfunction when the thruster stuck open and began spinning the spacecraft so quickly that the astronauts feared losing consciousness. Scott's commander, Neil Armstrong, stabilized the ship and the two had an early, but safe landing. Scott later commanded the Apollo 15 mission.

Fellow Air Force flier Schweickart also had a strong theoretical background: He graduated from the Massachusetts Institute of Technology with a master's degree in upper atmosphere physics and star tracking and also worked as a research scientist at MIT. Apollo 9 was his only flight in space.

After the triumph of Apollo 8 orbiting the moon, Apollo 9's mission was no less ambitious. Perhaps it did not have the glamor of circling another world, but it was an important step to getting to the moon.

Future crews had to be comfortable with docking and undocking the two Apollo spacecraft — necessary maneuvers for the lunar module to land on the moon, and for the command module to bring the astronauts from lunar orbit back to Earth.

Although the astronauts were serious about their work, they assigned whimsical names to the spacecraft: the command module was called Gumdrop, and the lunar module, Spider, because that's what the modules resembled.

The first few days went relatively smoothly. The astronauts docked the two spacecraft successfully on the first try. Gumdrop fired its engines several times with Spider attached, proving it could handle the mass of the lunar module during orbital maneuvers.

On Flight Day 4, NASA wanted to test an astronaut's ability to climb from one spacecraft to the other in case the lunar module and command module refused to dock with each other in lunar orbit. If that happened, a spacewalk to the command module would be the crew's only ticket home.

The crew planned to simulate this spacewalk. Unfortunately, Schweickart felt nauseated from almost the beginning of the mission. According to flight director Chris Kraft, McDivitt waited until almost the last minute to inform Mission Control about the situation.

"If he reported on Schweickart a few days earlier, the flight surgeons would probably have prescribed medications that could have eliminated his symptoms," Kraft recalled in his autobiography, "Flight: My Life in Mission Control" (Dutton, 2001). NASA elected to reduce the spacewalk requirements to make sure that Schweickart could perform the tasks safely.

Adapting on the fly

Astronauts are well-prepared to adapt their mission plans as needed, and the Apollo 9 crew was no exception.

Before the scheduled spacewalk, McDivitt and Schweickart performed their assigned tests of Spider's engine, showing that it could easily maneuver the spacecraft.

The spacewalk started out as planned, as Schweickart carefully suited up and climbed out on the front "porch" of Spider to collect data on the outside. He was then supposed to clamber over to Gumdrop. However, Schweickart began to tire and McDivitt decided to cancel that climb. Mission Control agreed with the decision, and the team called it a day.

Flight Day 5 brought the hardest and most exciting part of the mission: undocking the two spacecraft and flying the lunar module by itself. McDivitt and Schweickart flew Spider more than 100 miles (160 kilometers) away. Scott, remaining in Gumdrop, watched in wonder as Spider got smaller and smaller, appearing like a bright star in the distance, and then disappeared.

Spider's crew then turned on their "ascent" stage to simulate rising again from the moon, while Mission Control waited anxiously to see if it worked. The engine fired flawlessly, and Spider eventually docked with Gumdrop safely.

The crew remained in orbit until March 13 and splashed down about 3 miles from their recovery ship in the Atlantic Ocean. Apollo 9's tests of Spider proved the lunar module could work in space. With that established, NASA could turn to the tricky problem of testing it near the surface of the moon.

The 50th anniversary of Apollo 9 is in March 2019. Gumdrop is on display at the San Diego Air and Space Museum, while Spider burned up as planned in the Earth's atmosphere.

Apollo 9 was an important engineering test for the lunar module. Even though the crew did not gain the prestige of heading out to the moon, and even though the mission is not well-remembered by the public today, Apollo 9 was a crucial step in getting ready for lunar landings.

In 1969, Apollo 10 performed a landing simulation while in lunar orbit, and Apollo 11 made the first landing. Several other landing attempts followed between 1969 and 1972, with all but one crew (Apollo 13) fulfilling their objectives and making it onto the lunar surface.

Following the Apollo program, NASA turned its focus to Earth science and embarked on the space shuttle program (1981 to 2011) as well as the International Space Station program (starting in 1998) to test long-duration spaceflight. The agency, however, may return to the moon in the coming years. In late 2017, the Trump administration directed NASA to return humans to the moon before voyaging on to Mars. NASA is considering a design for a lunar space station, called the Deep Space Gateway, and working on a spacecraft for long-duration voyages, called Orion.