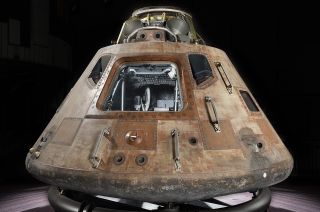 The Apollo 11 command module "Columbia" will be displayed at the Cincinnati Museum Center in Ohio as the new fifth and final stop of the Smithsonian's Destination Moon: The Apollo 11 Mission touring exhibition.
(Image: © Smithsonian)

The spacecraft that carried the crew of the first moon landing to and from Earth 50 years ago has just had its current mission extended.

The Smithsonian, which has been touring the command module "Columbia" as part of its "Destination Moon: The Apollo 11 Mission" exhibition, made the surprise announcement on Friday (June 14) that the capsule will stay on the road beyond the 50th anniversary of the historic lunar flight. The next and new final stop for the spacecraft, together with more than 20 related artifacts, will be in Cincinnati, Ohio.

The exhibition, which is currently at The Museum of Flight in Seattle for the 50th anniversary of the moon landing, will be on display in Cincinnati beginning Sept. 28 through Feb. 17, 2020.

The exhibition's extension came about for the same reason the command module was deployed on tour two years ago. The exhibit previews part of a new gallery at the National Air and Space Museum in Washington, D.C., which is slated to debut to the public in 2022.

"The museum is in the midst of a major transformation of its permanent galleries. A change in the construction schedule has opened our ability to add one additional stop to the original four-city tour," explained Springuel.

Before arriving in Seattle, the Destination Moon exhibition was hosted by Space Center Houston in Texas, the Saint Louis Science Center in Missouri and the Senator John Heinz History Center in Pittsburgh, Pennsylvania. The original plan was for the artifacts to return to the National Air and Space Museum's Steven F. Udvar-Hazy Center in September, to await their permanent installation in the new Destination Moon gallery.

"Bringing [the traveling exhibition] Destination Moon to Ohio is a natural fit," said Springuel. "The state, after all, is 'the birthplace of aviation.'"

In addition to Orville and Wilbur Wright, the Dayton-natives who invented the first powered aircraft to take flight, and John Glenn, who became the first American to orbit Earth before representing Ohio in the U.S. Senate, there is also the state's connection to the first human to walk on the moon.

"There could be no more appropriate place, both because of the venue but also because Carol and Neil chose to make Cincinnati their home," said Senator Rob Portman (R-OH). "He is from Wapakoneta, so he is not from Cincinnati originally, but this is where he chose to live and work, including teaching at the University of Cincinnati and starting his businesses. So we are so proud to have that heritage here and that legacy of Neil Armstrong and the first step on the moon."

The Cincinnati Museum Center is also home to Armstrong's piece of the moon.

"At one point around 2005, my father was given the honor of taking a moon rock and giving it to some organization. He had no constraints to where that moon rock might go and he chose to give it here," said Armstrong's son, Mark. "I am just really pleased that Cincinnati and the Cincinnati Museum Center has been chosen to be the final destination on this incredible exhibit's way back to Washington, D.C."

The Cincinnati Museum Center recently unveiled a new permanent exhibit, the Neil Armstrong Space Exploration Gallery, dedicated to celebrating the Apollo 11 mission. The gallery, which now features interactive elements, original equipment and artifacts, will expand in 2020 to look toward the future of space exploration.

The command module's arrival in Cincinnati will mark the second time the capsule has been in Ohio. Nearly 80,000 people saw the spacecraft when NASA displayed it in 1970 at a state fair in Columbus as part of a 50-state tour.

"Now, 47 years after entering the Smithsonian's collection, we are honored to take it on the road once again and bring it back to Ohio," said Springuel.

In addition to the command module, the Destination Moon: The Apollo 11 Mission exhibition also features the spacesuit visor assembly and gloves that Buzz Aldrin wore on the moon, the Omega Speedmaster chronograph that Michael Collins wore in lunar orbit and an Apollo lunar sample return container that Armstrong and Aldrin used to return the first moon rocks to Earth.

"This is an incredible opportunity to see these iconic pieces of history," said Elizabeth Pierce, president and CEO of the Cincinnati Museum Center. "We are honored to bring this national treasure to Cincinnati and inspire our region for a giant next leap."