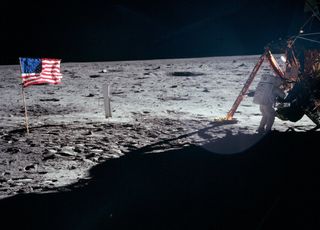 When Neil Armstrong was the first astronaut to walk on the moon 50 years ago this summer, he became an overnight hero to the world. To his children, though, he remained their dad.

Both sides of the famous astronaut show clearly in a new set of items for sale at Heritage Auctions from May 9 to 11, including American and state flags tucked away in the spacecraft during the flight, a leather jacket that the moonwalker enjoyed wearing constantly, and more. These items were carefully curated by the Armstrong family and required a lot of sorting before they were put up for sale. Armstrong died suddenly in 2012 at age 82.

In an exclusive interview with Space.com, Mark Armstrong (the youngest of his father's children) said his father's legacy included trying to make day-to-day life in the family as normal as possible. This happened at a time when Armstrong was constantly in the news and was also participating in a multiweek world tour with the Apollo 11 crew to personally meet world leaders. Some items acquired during that tour are for sale at the auction.

Two items that caught Mark Armstrong's eye are a book and pictures from the Soviet Union, collected in 1970 while his father was trying to foster better relations with the space program there on behalf of NASA. For much of the 1960s, the Soviet Union and the United States were competitors in space, but the mood turned more toward cooperation after the American moon landing.

Five years after his visit, American astronauts and Soviet cosmonauts flew together for the first time during Apollo-Soyuz. This was one of the first steps the countries took together toward the International Space Station, which Russia and the United States started assembling in orbit in 1998 and continue to manage together today.

Neil Armstrong clearly worked hard for the space program, but he also worked hard for his family. "There really wasn't much training, either for Dad or for the family, on how to handle life after the flight," recalled Mark, who was 6 years old when his father took "one small step" at the Sea of Tranquility in 1969.

"My parents both, I think, tried very hard for things not to change," he added. "They wanted our family dynamic, and the people that we were, to be the same after the flight as before the flight. I think Dad had the worst challenge — the most difficult challenge, probably by several orders of magnitude — because of the number of requests and requirements and opportunities and mandates that were coming at him on a daily basis, which were overwhelming."

Mark joked that his father's training as a test pilot sometimes frustrated him. Neil was trained to wait until the last second before choosing to abort, for example, which came in handy when he landed the Eagle spacecraft on the moon with only a few seconds of fuel to spare. Then, Neil would use the same approach with his sons. "I'd ask if can spend the night at Jack's house next week. He'd say, 'I'll think about it,' and he'd think about it. Then he'd tell you on Friday," said Mark, laughing at the memory.

He added, though, that the family tried to stick to the same principles for success that they had believed in before the flight. "We used that as a foundation for making decisions on a daily basis, and he was really amazing at boiling down his decisions to what was the right thing to do. He would always do what the right thing was, even if that was unpopular, but he was exceptionally good at making the right choices. I think that's a legacy in and of itself. You take every opportunity, take every decision and think about it carefully, and do what your internal sense of right and wrong tells you what you should do. Then stick to it."

Space was limited on the Apollo 11 spacecraft; in an answer to a question that has become famous, Neil Armstrong was asked what he would like to take with him on the trip, and he quipped that he would prefer more fuel. But there were some items, many of which are going on sale at Heritage Auctions, stashed inside the Columbia command module.

For instance, the auction includes numerous flags, which would have been easy to roll up and store, including a range of American flags and some state flags. "I haven't been able to attribute exact rhyme or reason as to why certain flags were taken and others were not. Maybe some individuals had a personal connection," Mark Armstrong said. He added that the Texas and Ohio flags had an obvious personal connection to his father, who had lived in both of those states.

Also included are pieces of a propeller and wing that formed part of the first aircraft to take flight in 1903, built and flown by Wilbur and Orville Wright and a small team. The pieces were saved and kept in the Wright estate. In 1969, the Air Force wrote Neil Armstrong by postal mail, asking if he would be willing to take some pieces of the aircraft with him on Apollo 11. The military branch offered to let their astronaut keep half of the pieces, and the rest would be returned to the Air Force.

"It was important to take the genesis of flight with him," Mark Armstrong said. "First and foremost, he was an engineer and someone who wanted to make aircraft better. That was his boyhood goal, to be an aircraft designer.

"Somewhere along the line," Mark added, "he decided he could do that more effectively if he knew how to fly them. At his earliest opportunity, he got his pilot's license, and I think the day he turned 16, he was eligible to fly; he had done all the work. He didn't receive his driver's license until much later that year, because it was less important to him."

With the 50th anniversary of the moon landing this year, NASA and museums around the United States plan to host numerous events during the official moon landing date of July 20. Apollo 11 crew members Buzz Aldrin and Mike Collins are still living, and many prominent artifacts of the mission are on display in museums. The spacecraft Columbia, which normally resides in Washington, D.C., is on tour and will be in Seattle for the anniversary date.