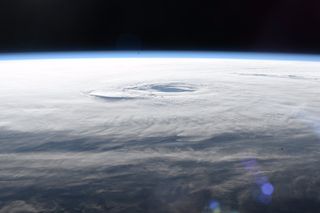 A view of Hurricane Maria from the International Space Station.
(Image: © Randy Bresnik/NASA/Twitter)

NASA astronaut and Expedition 53 Cmdr. Randy Bresnik shared his aerial views of Hurricane Maria on Twitter. His photos, taken through the windows of the International Space Station (ISS), show the enormous storm stretching across the horizon like a thick blanket of snow.

Closer views of the hurricane's center reveal some interesting shapes forming in the cloud tops. "Amazing cloud formations radiating out as we speed by," Bresnik tweeted from the ISS today (Sept. 21). [In Photos: Hurricane Maria Seen from Space]

The images show a section of extra-tall cumulonimbus clouds towering near the eye of the hurricane. According to NASA, these higher cloud formations are called "hot towers" and can grow higher than the troposphere, at an altitude of about 9 miles (14.5 km).

"These towers are called 'hot' because they rise to such altitude due to the large amount of latent heat," NASA officials said in a statement. "Water vapor releases this latent heat as it condenses into liquid. Those towering thunderstorms have the potential for heavy rain."

Satellites have been monitoring the storm space, too. These satellites collect data about cloud temperatures, rainfall rates and other meteorological information that can help weather forecasters track the storm's path and intensity.

One of those satellites, NASA's Terra satellite, has been measuring Maria's clouds and recording temperatures across the entire storm. A new 3D thermal map created with the satellite's Moderate Resolution Imaging Spectroradiometer (MODIS) instrument shows the same "hot tower" cloud formation that Bresnik spotted from the space station.

"Colder clouds, which are generally higher in the atmosphere, are shown with white. Somewhat warmer, lower clouds appear purple," NASA officials wrote in the image description. "The image reveals a very well-defined eye surrounded by high clouds on all sides — an indication that the storm was very intense."

Indeed, the storm was "very intense" when it ravaged Puerto Rico yesterday, making landfall as a Category 4 storm. The National Hurricane Center recorded maximum sustained wind speeds as high as 155 mph (250 km/h) and rainfall rates of about 7 inches (18 centimeters) per hour.

The hurricane is now moving through the Atlantic Ocean with its eye traveling just northeast of the Dominican Republic. Weather forecasters say Hurricane Maria probably won't make landfall on the East Coast of the U.S., but a hurricane warning remains in effect for the Caribbean islands of Turks and Caicos and the Bahamas. You can follow the latest updates on Hurricane Maria here.