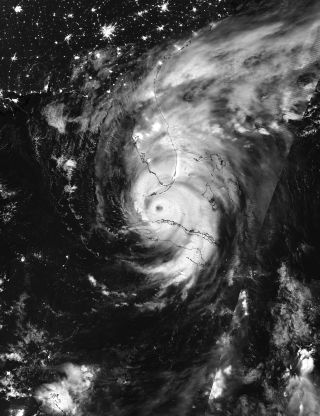 Update Sept. 11: Irma was downgraded to a tropical storm as it moves northward after battering the Florida peninsula. National Oceanic and Atmospheric Administration (NOAA) satellites have been capturing imagery of Irma, Jose and Katia since they first began to form in the Atlantic Ocean and Gulf of Mexico. Cameras on the International Space Station have also shown Hurricane Irma through the eyes of astronauts. Scroll down to seee the latest videos of Hurricane Irma, as well as Jose and Katia. See complete Hurricane Irma coverage from our sister site Live Science.

NOAA GOES-13 view of the storms from Sept. 7-9, 2017. Irma hit Cuba as a Category 5 hurricane, but has since weakened to a still powerful and dangerous Category 4 storm. It is expected to strengthen again as it approaches the U.S. mainland in Florida. Hurricane Jose is a Category 4 hurricane and Katia was downgraded to a tropical storm.

Sept. 8: Hurricanes Jose and Irma from the International Space Station:

NOAA's GOES-16 satellite's Geostationary Lightning Mapper (GLM) has captured imagery of lightning flashes in the churning clouds of Hurricane Irma over the course of 80 hours (Sept 4-8, 2017). "Hurricanes don't often exhibit a great deal of lightning, because their winds are mostly horizontal, not vertical," according to NOAA.

Irma was a category 5 hurricane when this video was shot.

Watch as Jose develops into a hurricane behind Irma.