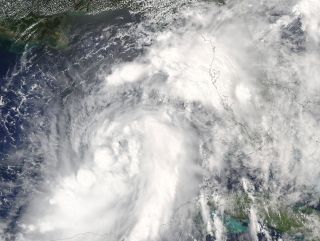 Tropical Storm Hermine was upgraded to a hurricane this afternoon, as the Gulf of Mexico storm's maximum sustained winds increased to near 75 miles per hour (120 km/h). A NASA satellite glimpsed the strengthening storm earlier today as it takes aim at the Florida coast, where it is expected make landfall tonight.

NASA's Global Precipitation Measurement (GPM) satellite passed directly above Hermine (which was still classified as a tropical storm at the time) earlier today, and spotted intense weather conditions in Hermine's center, agency officials said. The GPM mission measured a rainfall rate of more than 9.9 inches (251 millimeters) per hour. A 3D image of Hermine created using GPM data mapped the storm, which was reaching heights of more than 9.9 miles (16 kilometers) over the Gulf of Mexico at the time. [Hurricanes from Above: Images of Nature's Biggest Storms]

If Hurricane Hermine makes landfall with wind speeds topping 74 mph, as it is expected to, it will become the first hurricane to make landfall in Florida in nearly 11 years, according to the National Oceanic and Atmospheric Administration (NOAA). It will also be the first hurricane to form in the Gulf Coast since 2013, ending the longest streak of hurricane-free days recorded in the last 130 years, according to NOAA.

Areas along Florida's Gulf Coast will experience strong winds and a dangerous storm surge, NOAA's National Hurricane Center (NHC) warned. Rain accumulation could cause flash flooding in affected areas, and the NHC reported there is also risk of tornadoes.

The NHC has posted a number of warnings and watches for areas along the Florida coast as the newly designated Hurricane Hermine approaches. The NHC said Hermine is moving at 12 mph (19 km/h) toward the north-northeast and is expected to hit the Florida coast tonight or early Friday.

Florida Gov. Rick Scott put 51 counties under a state of emergency and called Hermine a "life-threatening" storm at a news conference earlier today.