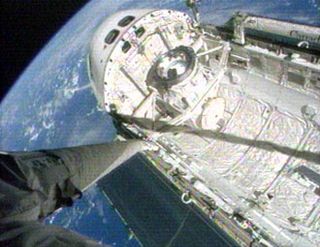 A camera on Atlantis' robotic arm captured this image of the shuttle's payload bay and crew cabin on Sept. 20, 2006.
(Image: © NASA TV.)

CAPECANAVERAL, Fla. - NASA has found no reason to once-moredelay tomorrow's landing for the space shuttle Atlantis and itssix-astronaut crew after an initial review of imagery from last-minuteinspections today, mission managers said Wednesday.

"We didn'tsee any evidence of any kind of damage," Atlantis' STS-115 entry flightdirector Steve Stich in a status briefing. "So far the inspections are goingwell."

"I fullyexpect that, if we find no problem with the [thermal protection system], thatwe'll land tomorrow," Stich said.

"They soundgood, they sound rested, they sounded eager," Dye said of Atlantis' crew duringtoday's briefing. "They're jumping into procedures that they've never donebefore, and I think they're doing great."

About theonly things that jumped out at image analysts during today's heat shieldinspection were the absence of a protrudinggap-filler and an orange plastic spacer, known as shimstock, that were jutting from between the heat-resistant tiles on Atlantis'belly-mounted external tank umbilical doors, Stich said.

"We knowthe team's working really hard," Jett told flight controllers this morning."These last-minute days can be tough and we know that you're under somepressure."

Jett andhis crewmates delivered a $372 millionpair of trusses and newsolar arrays to the ISS during their 12-day mission, marking the firstmajor addition to the orbital laboratory since late2002.

Jett andhis crewmates had just put Atlantis through a rigorous, but standard,pre-landing test known as a flight control systems (FCS) checkout to test theelevons and other systems when the initial mystery object was sighted at 2:45a.m. EDT (0645 GMT) Tuesday.

Atlantisastronauts later reported - and photographed - an object though to be a plasticbag later Tuesday, then again spotted what Jett described as a bit ofreflective cloth early Wednesday.

It is notuncommon for small items to float out of shuttle payload bays once their doorsare opened just after launch, though it is uncommon late in the flight, Stichsaid, adding that the flight control system checks to cause considerablevibrations and shudders aboard orbiters before landing.

"We areshaking the vehicle up and perhaps after FCS checkout we knocked a few thingsout of the payload bay," Stich said.

Stichadded that NASA and the Atlantis crew lost nothing from today's inspection,since the poorweather expected to plague a Wednesday landing attempt arrived in forceearly today.

Rainshowers would have prevented Atlantis' from landing during two opportunitiestoday, prompting the shuttle's six-astronaut crew to spend one more day inorbit anyway, he added.

"Todaywould not have been a great day to land," Stich said.

NASA'sSTS-115 Mission Management Team is expected to convene later today, and briefthe media at 12:00 p.m. EDT (1600 GMT). That briefing will be broadcast live onNASATV, which is available by clickinghere.