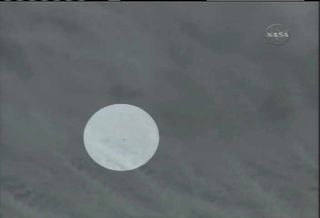 Tomorrow's early morning shuttle landing has been delayed after NASA detected of a mystery object hovering between the shuttle and Earth.
(Image: © NASA)

CAPE CANAVERAL, Fla. - NASA shuttle managers are deciding whether simple camera views, a third heat shield survey or possibly even a spacewalk may be required to address a mystery object near the space shuttle Atlantis that has already delayed the spacecraft's planned Wednesday landing.

"We have ruled out nothing and we'll take the time that it needs to take," NASA's shuttle program manager Wayne Hale told reporters today. "We'll come back and maybe have a little better gelled plan later this afternoon."

Landing is now set for Thursday at 6:21 a.m. EDT (1021 GMT), NASA said, adding that the orbiter has enough supplies to last through Saturday. A press briefing featuring the heads of Atlantis' STS-115 Mission Management Team is expected no earlier than 6:00 p.m. EDT (2200 GMT) with additional details.

"The question is 'What is it?'" Hale said, adding that the object - which appeared small and dark against a blue Earth in video - could be something as simple as ice, ceramic cloth gap-filler, or a piece of harmless shim stock plastic known to be dangling from Atlantis' heat shield. "Is it something benign like that, which we have seen before, or is it something more critical that we should pay attention to?"

While the object's appearance during Atlantis' flight systems checkout - which astronauts have likened to "standing next to a howitzer" when the thrusters fire - and its relative motion near the shuttle suggest the two are the same, Hale cautioned that extreme reactions like a spacewalk or potential repair are at the far end of the list of possible responses.

Atlantis' STS-115 crew - commanded by veteran shuttle flyer Brent Jett - has already conducted two planned detailed inspections of their spacecraft's heat shield that cleared its vital tiles and carbon composite panels of any concerns, first after launch, and then after about nine days in orbit. The second scan was completed on Monday.

Hale said that discovery of the mystery object - which cannot be identified in video because of poor resolution - came at an opportune moment when mission managers were ready to declare Atlantis fit for landing.

"Normally we would have considered ourselves cleared for reentry by the end of the late inspection," Hale said. "This is just something that by serendipity we found out that we think we ought to go take another look at."
Shuttle flight controllers at NASA's Johnson Space Center in Houston spotted the object floating between Atlantis and the Earth early

Tuesday, just after the orbiter's six-astronaut crew put their vehicle through a standard pre-landing shakedown to test thrusters, hydraulics and a number of other systems.

"We shake the ship pretty good when we do this," Hale said of the flight systems check, adding that a flight controller spotted a small object in Atlantis' vicinity and backlit by the Earth about 15 minutes after the 2:30 a.m. EDT (0630 GMT) check today.

"It could be a little something up close or a bigger something a little farther away, it's a bit of a mystery," Hale said of the object. "We're principally going about the task of making sure that the orbiter is safe for reentry and landing regardless of what that may have been."

Atlantis' Sept. 9 launch, however, caused no such damage, and the heat shield was found to be in pristine shape after the Monday inspection, Hale said.

A series of accelerometers, which recorded stresses or potential impacts along Atlantis' wing leading edges did record about eight events around the time of the shuttle's flight systems checkout, Hale said, adding that engineers are evaluating the data to determine its relevancy. The accelerometers also reported phantom signals during Atlantis' liftoff, registering signals where no impacts were seen or damage found, Hale added.

Atlantis' STS-115 astronaut crew is slated to go to sleep at about 1:45 p.m. EDT (1645 GMT), and have already been told of the landing postponement.

"We're going to wave off for tomorrow," NASA astronaut Terry Virts, serving as spacecraft communicator, told Atlantis' STS-115 crew, adding that potential use of the shuttle's robotic arm or inspection boom is a possibility on Wednesday. "The good news is that you won't have to get suited up, and get fluid-loaded and then wave off tomorrow."

Mission controllers did ask the Atlantis astronauts to prime the shuttle's robotic arm system to allow its "elbow" camera to be used in a video survey.

Jett later reported the sighting of an object by STS-115 mission specialist Daniel Burbank, which the crew took photographs of as it drifted away.

"It was definitely moving away," Jett told Virt, adding that the object was fairly small, moving away from Atlantis at a clip of about one to two feet per second at a seemingly constant rate. "I was able to get several shots."

Engineers and mission planners will work through the afternoon to develop a plan for either additional surveys, inspections or other required work for the STS-115 crew, Hale said. That work could go on well into the crew's evening, and potentially until Jett and his crewmates are scheduled to awake at 9:45 p.m. EDT (0145 Sept. 20 GMT) tonight for their next day of orbital work, he added.

NASA's STS-115 Mission Management Team is expected to convene later today, and brief the media no earlier than 6:00 p.m. EDT (2200 GMT). That briefing will be broadcast live on NASA TV, which is available by clicking here.