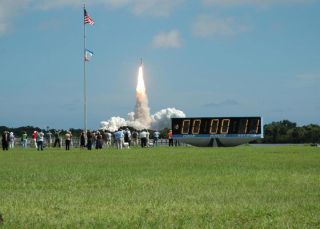 NASA's space shuttle Atlantis roars off the launch pad for a rendezvous with the International Space Station on mission STS-115. In the foreground is the countdown clock, marking launch and mission-elapsed time, on the grounds of the NASA News Center.
(Image: © NASA/Webb Dillard.)

CAPECANAVERAL, Fla. - Despite a beginning beleaguered by lightning,stormsand a last minute glitches, NASA's shuttleAtlantis rocketed spaceward Saturday with six astronauts and the future of the International SpaceStation (ISS) aboard.

"Well,Brent, it looks like you're long wait is over," NASA launch director MichaelLeinbach told Atlantiscommander Brent Jett just before liftoff. "We wish you all the best luck inthe world, Godspeed and we'll see you in about two weeks."

"ThanksMike, we appreciate those words and the effort to make this launch window,"Jett said, adding that his crew has waited for four years and through two testmissions for their chance to resume ISS construction. "We're ready to get towork."

Atlantis' astronautcrew are hauling a 17.5-tonload of trusses and wing-like solar arrays to the ISS to mark NASA's firstISS construction flight since the 2003Columbia accident.

"We're confident that over the next few weeks, and few years for that matter, NASA is going to prove to our nation, our partners and our friends around the worth that it was worth the wait and the sacrifice," Jett said of resuming ISS construction.

Today'sliftoff comes after a series of delays for Atlantis, the last of whichculminated in the failure Friday of one of four liquid hydrogen fuel gaugesensors in the orbiter's external tank. That sensor worked perfectly duringtoday's liftoff, NASA officials said.

Otherdelays were prompted by a lightningstrike to the shuttle's launch pad, weather threats from a tropicaldepression and a powerglitch in a pump motor that helps cool one of the spacecraft's three vitalfuel cells. The fuel cell issue led shuttle officials to scruba Sept. 6 launch attempt, but was not in violation of any flight rules.

A busymission lies ahead for STS-115 astronauts, beginning with orbital photographyof Atlantis' external tank - shed after reaching orbit - as it fell back towardEarth. A heat shield inspection is set for tomorrow, followed by a Mondaydocking at the ISS and back-to-back spacewalks.

The $371.8million cargo aboard Atlantis is the first of many elements - among themadditional power segments, Russian modules and internationallaboratories - slated to launch toward the ISS. The first ISS module,Russia's Zarya,launched in 1998, with the last major addition arriving during NASA's STS-113mission aboard Endeavour in late 2002.

"Clearly weare into the heart of the assembly of the International Space Station," saidWayne Hale, NASA's space shuttle program manager, of the STS-115 mission,adding that its refreshing to once more engage in orbital construction. "We'reflying the shuttle for a purpose, to carry a payload, to create this marvelousresearch outpost [so] that we have a toehold in space. It is really the purposefor what we are here for."

Once complete,the space station will sport four wing-like solar arrays, weigh a whopping onemillion pounds and rival a five-bedroom home in living space, NASA officialshave said. Measured end to end, the orbital laboratory will run about 354 feet,making it the longest human-built structure ever to fly in space.

"Futureexpansion of the station hinges on the ability to power that expansion," NASAastronaut Doug Wheelock, who will help deliver a criticalconnecting node for new ISS modules next year during Atlantis' STS-120mission, told SPACE.com. "So this is really a critical piece in theflow."

Completionof the $100 billion space station stalled as NASA made shuttlesafety enhancements and launched twotest flights to recover from the loss of Columbia and its seven-astronautcrew. NASA is now aiming to complete thestation with 15 partner nations - which include Canada - by September 2010,when the three remaining shuttles are to be retired.

"We'repleased to be where we are right now, "said Beno?t Marcotte, station programdirector for the Canadian Space Agency which provided the ISSrobotic arm, before today's launch. "We're pleased to see the sequencestarting again."

More than140 spacewalks - threeof them planned for STS-115 - will have been staged to complete the ISS,NASA officials said, adding that one-fourth of the agency's shuttle flightswill have been dedicated to building the orbital laboratory.

"Clearlythese are the most complicated spacewalk and assembly tasks that have ever beendone before," Hale said.

From NASA'sperspective, completing the ISS is vital to the U.S. goals of returningastronauts to the Moon and pushing human explorers further into space.

"What we'redoing in building the space station is really preparing ourselves for Mars, andof course the Moon," NASAastronaut Michael Fincke, who served a six-month term aboard the ISS during2004's Expedition9 ISS mission, told SPACE.com. "I don't think personally you canskip any of the steps along the way."

Finckeadded that there is another benefit from the ISS construction effort aside fromthe exploration of space. With 16 countries working to complete the massivespace station, the project has proved an object lesson in internationalcooperation.

"I alwayssay that it's great when human beings on this planet work constructively andnot destructively," Fincke said.