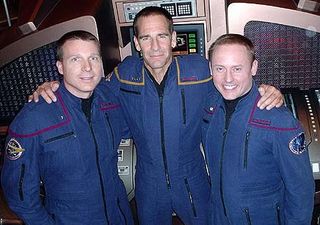 U.S. Air Force Lt. ColonelMichael Fincke is not just a professional NASAastronaut; he also plays one on T.V.

Tonight, during the finalepisode of “Star Trek: Enterprise,” Finckewill appear as an NX-01 engineer on the show’s fictional starship. Forthe now-experienced astronaut – Fincke hasflown aboard both the International Space Station (ISS) and Russia’sSoyuz spacecraft – there are parallels between the televisionshow’s mantra and NASA real-life vision of space exploration.

“They show the peacefulexploration of space, and that’s what we do here at NASA,” Fincke said of the “Star Trek: Enterprise” castand crew."Science fiction, in general, has inspired not just astronauts but all humans by giving form to our dreams to explore."

NASA astronaut Terry Virts also appears in the final "Star Trek: Enterprise" episode. Both he and Fincke visited the set during vacation.

"As a kid, I became interested in shows like the original Star Trek series and the first Star Trek feature movies," Virts said in a NASA interview. "They definitely had an impact in motivating me to a career with NASA."

It has been nearly seven monthssince Fincke returnedto Earth after a successful six-month stay aboard the International SpaceStation (ISS), where he served as Expedition 9flight engineer and science officer alongside Russian cosmonaut Gennady Padalka. Since his Earthly return in October 2004,he's split his time between the family he left behind and sharing hisexperience with reporters, actors, students and fellow NASA employees.

Fincke's daughter Taraliwas born just before Father's Day in June 2004 while he orbited overhead andspoke to his wife Renita via telephone. By the timehe set foot on Earth, she was about four months old. He and Renitaalso have one son, Chandra.

Fincke was a space rookie going intoExpedition 9, with eight years of training, four of which spent serving as abackup crewmember for ISS-bound spaceflights. Finally reaching space was theculmination of a personal dream for the astronaut.

"As an astronaut, I'veaccomplished about everything I set out to do in my career," Fincke told SPACE.com. "But as Gennady and Ialready said publicly and privately, we'd love to go again."

Fincke and Padalkaconducted four spacewalks during their mission - though one lasted mere minutes– and performed a series of repairs to both a U.S. spacesuitand a power unit for one of the station’s orientation gyroscopes.Padalka spent time working with the Russian-builtElektron oxygen generator as well.

“A lot of it was applicable tofuture space exploration,” Fincke said of theorbital repairs. “It’s great to be able to do things [first] closeat 240 miles away, as opposed to 240,000 miles away.”

“That was definitelyone of the highlights,” Fincke said. He and Padalka later received a Starfleet Award for their workaboard the ISS.

The two Expedition 9astronauts, along with ISS-visiting cosmonaut Yuri Shargin,rode their Soyuz reentry vehicle down to a somewhat off-kilter landing whenhigh winds blew the spacecraft over on its side.

“I think our landing was alittle more solid than the average, and we caught a gust of wind,” Fincke said. “But we all landed safely and nothingwas hurt.”

Working alongside Padalka was among the largest benefits for Fincke, who also trained with the cosmonaut for four yearsas the backup crews for both Expeditions 4 and 5 to the space station.

“Gennady is an experiencedguy, and he took me under his wing so that next time, I could be theexperienced guy,” Fincke said. “He tookthe extra time to show leadership, and how to be a good commander.”

Fincke said that while returningNASA’s space shuttle to flight is imperative for the U.S. space program,not only to regain its human spaceflight capability but also to complete theISS, pushing out toward the moon and beyond is the ultimate goal for the planetas a whole.

“I’ve always believedthat humans are someday going to inherit the stars,” Finckesaid in an interview. “I think it’s in our destiny.”