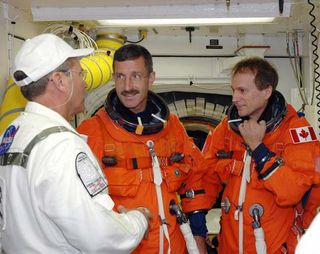 Burbank,MacLean and their four STS-115 crewmates plan to deliver two newport-side trusses and a set of new solar panel wings to the ISS that willdouble station's power output once activated.

An astronomerat heart, Burbank is celebrating just over a decade of NASA service since hejoined the astronaut ranks in April 1996, but that landmark came at a cost.

"It's kindof ironic as an amateur astronomer," Burbank, 45, said in an interview. "In Houston, with the tempo if our training and other work we do, I probably spend less timeat the eyepiece of a telescope now than I did before I came here."

Burbank's road to NASA began in the U.S. Coast Guard, whichthe Tolland, Connecticut astronaut joined in 1985 to make a difference as a rescuepilot.

"When I wasgrowing up I wanted to be in the Coast Guard," Burbank, a husband and father oftwo children, said in a NASA interview. "I wanted to go on Coast Guard smallboats and rescue people in the surf."

After afellow Coast Guard pilot became as astronaut, Burbank applied not once - but threetimes - before finally being accepted. His first spaceflight, NASA'sSTS-106 mission in September 2000, was also aboard Atlantis and also aimedat outfitting the ISS. But the station today is much different than when Burbank left it.

"We dockedto a station that had no people," Burbank said, adding that STS-106 preparedthe ISS for permanent human habitation. "The lights were out, the hatches wereclosed and a lot of the systems were powered down as you expect."

ForSTS-115, Burbank serves as Mission Specialist-2 and flight engineer, and willassist Atlantis commander Brent Jett and pilot Chris Ferguson on the flightdeck during the critical launch and landing phases.

He and MacLeanwill also conduct the second of threeplanned spacewalks to install their cargo - the station'sPort 3/Port 4 truss segments and new solar arrays - to the ISS. But Burbank will take special joy in easing the 17.5-ton mass of aluminum girders, stowedarrays, batteries and other hardware out of Atlantis' cargo bay with theshuttle arm to a point where MacLean can pluck it up with the ISS robotic arm.

"Flyingthat arm is just going to be a wonderful thing to do," Burbank said, who isalso charged with overseeing the meticulous heatshield inspections using the arm's 50-foot (15-meter) sensor boom early andlate in the spaceflight.

MacLean,STS-115's Mission Specialist-4, is the odd astronaut out of sorts on Atlantis'STS-115 crew.

As arepresentative of the CSA, he is the only non-NASA astronaut of the bunch andthe only flyer who did not get his start in his country's naval institutions(though his family has a history of shipbuilding). In fact, when Canada's call for its first astronauts went out, he did not even think to apply.

"It took aphone call from colleague of mine to say, 'You know, you should really do this;this is something that maybe you could do,'" said MacLean, an Ottowa, Ontario native with a Ph.D in physics. "And so I did, and six months later I was on thatteam."

MacLean,51, was selected one of Canada's first six astronauts in 1983 and served asprogram manager for the Advanced Space Vision System which usescomputer-controlled camera to aid use of the shuttle and ISS robot arms. He firstreached orbit in 1992 aboard the space shuttle Columbia during NASA's STS-52mission, where he performed experiments and tested the robotic arm Space VisionSystem.

"This is atremendous privilege for me to be able to operate this technology throughoutthe course of the mission," MacLean said.

A husbandand father, MacLean also led work to develop the first prototype of the lasercamera system now used to scan shuttle heat shields during orbital inspections.Canadian engineers beginning planning an early version of the boom-mountedsystem in the 1980s, he said.

"What Ifind interesting is that Canada was thinking about [heat shield] repair 20years ago," MacLean said, referring to the early boom work. "

So we werewell positioned to help with respect to the space shuttle return to flight whenthe [Columbia] accident happened."

TheCanadian astronaut said he watched NASA recover from the Challenger accident in1986 and then again from the 2003loss of Columbia - which suffered heat shield damage from foam debris atliftoff - and takes heart in the strides since to increase astronaut andvehicle safety.

"Foam is a knownproblem now, it's not fully understood but it's a known problem," MacLean said."Foam will not bite us again."