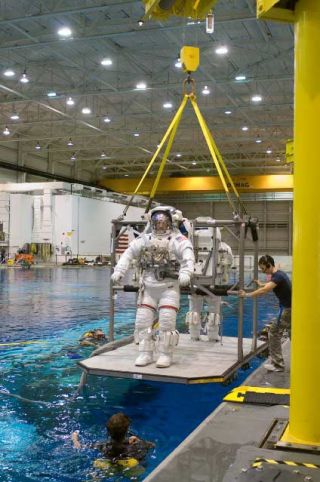 STS-115mission specialists JosephTanner and Stefanyshyn-Piper will perform the first and third spacewalks oftheir mission, with their crewmates DanielBurbank and Canadian Space Agency astronaut StevenMacLean tasked with the second EVA.

The fourspacewalkers have trained so heavily during their more than four-year road toflight - which was delayed as NASA recovered from the 2003 Columbia tragedy - thatthe two teams can perform each others duties.

"We weretallying up the number of days that we have spent actually underwater in theNeutral Buoyancy Lab training for these spacewalks and we're upwards of 80nominal timeline runs," Burbank said this month, referring to NASA's massivespacewalk training pool. "And that's an awful lot more than crews ordinarilywould have."

Each of thethree STS-115 EVAs are expected to run at least 6.5 hours to install a pair ofnew station trusses and solar wings, as well as perform maintenance outside theorbital laboratory.

"We've beenpreparing for it for quite a long time, four years, training a great crew,"said John Haensly, lead EVA officer for the STS-115 mission, praising the teameffort between astronauts and trainers to reach this point. "When the crew goesout and performs an EVA, they make it look easy."

Before Tanner and Stefanyshyn-Piper even step out of thespace station's Quest airlockon Flight Day 4, the work will have already begun to add the integrated Port3/Port 4 (P3/P4) segments to the port side of the ISS's main truss.

MacLean andISS astronaut Jeffrey Williams will wield the space station's robotic arm toattach the 17.5-ton truss segment to the outboard end of the station's Port 1(P1) truss. Once three of four motor driven bolts have secured the segment tothe ISS, Tanner and Stefanyshyn-Piper begin their spacewalk to connect vitalpower and cooling, deploy two phone booth-sized cylinders - each containingsolar arrays masts - and swing out arm-like boxes holding the folded up solarblankets for each array.

The primarygoal of EVA 2 on Flight Day 5 seems basic - removing a plethora of locks and restraintsthat secured the P3/P4 truss segments in place during Atlantis' launch. But for Burbank and MacLean, the tasks are vital.

"This willbe the first one of those that we've installed and it's almost a car-sizedmechanism to turn this entire structure," Paul Hill, NASA's mission operationsshuttle manager, told SPACE.com of the SARJ unit. "So it will beinteresting to see how this guy performs in orbit."

The SARJunit will be put to the test before solar array deployment on Flight Day 6,when it will be used to turn the entire P4 truss 180 degrees. Once there,astronauts inside the ISS will remotely unfurl the station's new solar wingstaking care to watch for sticking panels and make sure tensions lines stay ontrack.

The thirdspacewalk, also by Tanner and Stefanyshyn-Piper, has been compared to a cleanup job. The astronauts will venture out on Flight Day 7 to deploy a radiator tocool the P4 solar array. They will also clear a path on the truss for thestation's railcar-like Mobile Transporter - used to move the outpost's roboticarm during construction, and perform a series of maintenance tasks.

One featurethat sets the STS-115 spacewalks apart from past ISS construction flights willbe the first use of the station's Quest airlock as a pre-EVA campground to savetime getting astronauts suited up and out the hatch.

Known as anairlock campout, the activity was firsttested earlier this year by ISS Expedition13 flight engineer JeffreyWilliams and Expedition12 commander Bill McArthur and calls for spacewalkers to spend the nightprior to an EVA locked inside the Quest airlock at a lower than normalpressure.

By droppingthe pressure inside from the station's normal 14.7 pounds per square-inch (psi)- or about the same pressure at sea level on Earth - to 10.2 psi, spacewalkerscamping out before an EVA can save up to an hour or more typically spent exercisingand breathing pure oxygen to purge nitrogen from their blood. The nitrogenpurge helps prevent astronauts from developing the bends during spacewalks.

"We saveabout an hour of time the way we lay it out and we expect that we'll get thatthe morning of each EVA," Haensly said.

The STS-114crew originally planned four spacewalks outside the ISS during their busymission, but the final outing was pulled to eas3e an already heavy spacewalkingwork load.

"Things onthat EVA were not critical to continuing assembly," Haensly told SPACE.com."They were either moved to other missions or we decided we wouldn't do thoseanymore."

But STS-115spacewalkers said there is a chance that, if push came to shove, a fourthspacewalk could be scheduled if the primary goals of the first three EVAs areleft incomplete.

"We still havea potential for doing one," Tanner told reporters, adding that Atlantis' STS-115mission includes 11 days plus several more to handle weather issues duringlanding and extra time in orbit. "The capability is always there."