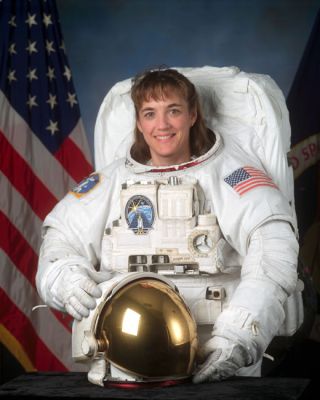 EXPERIENCE: Stefanyshyn-Piper received hercommission from the Navy ROTC Program at MIT in June 1985. She completedtraining at the Naval Diving and Salvage Training Center in Panama City,Florida as a Navy Basic Diving Officer and Salvage Officer. She completedseveral tours of duty as an Engineering Duty Officer in the area of shipmaintenance and repair. She qualified as a Surface Warfare Officer onboard USSGRAPPLE (ARS 53).

In September 1994, Stefanyshyn-Piper reported to theNaval Sea Systems Command as Underwater Ship Husbandry Operations Officer forthe Supervisor of Salvage and Diving. In that capacity, she advised fleetdiving activities in the repair of naval vessels while waterborne.

Additionally she is a qualified and experiencedsalvage officer. Major salvage projects include: development of salvage planfor the Peruvian Navy salvage of the Peruvian submarine PACOCHA; andde-stranding of the tanker EXXON HOUSTON, off the coast of Barber's Point, onthe island of Oahu, Hawaii.

NASA EXPERIENCE: Selected as an astronaut candidateby NASA in April 1996,Stefanyshyn-Piper reported to the Johnson Space Center in August 1996.

Having completed two years of training andevaluation, she is qualified for flight assignment as a mission specialist.Initially assigned to astronaut support duties for launch and landing, she hasalso served as lead Astronaut Office Representative for Payloads and in theAstronaut Office EVA branch.

Stefanyshyn-Piper is assigned to STS-115.The mission is targeted to launch in 2006.