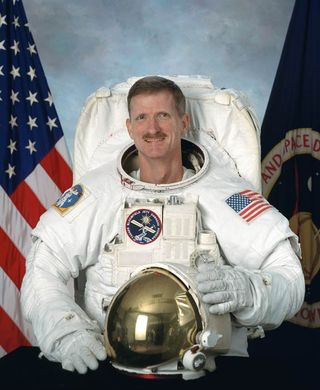 EDUCATION: Graduated from Danville HighSchool, Danville, Illinois, in 1968; received a bachelor of science degree inmechanical engineering from the University of Illinois in 1973.

EXPERIENCE: Tanner joined the Navy aftergraduating from the University of Illinois in 1973. He earned his Navy pilotwings in 1975 before serving as an A-7E pilot with Light Attack Squadron 94(VA-94) aboard the U.S.S. Coral Sea. He finished his active service as anadvanced jet instructor pilot with Training Squadron 4 (VT-4) in Pensacola,Florida.

His primary flying responsibilities involved teachingthe astronaut pilots SpaceShuttle landing techniques in the Shuttle Training Aircraft and instructingthe pilots and mission specialists in the T-38. In addition to his flyingduties, Tanner held positions as the aviation safety officer, the head of thepilot section, and the Deputy Chief of the Aircraft Operations Division (AOD).He has accumulated more than 8,862 hours in military and NASA aircraft.

Selected as an astronaut candidate by NASA in March1992, Tanner reported to the Astronaut Office in August 1992. He completed oneyear of initial training and worked in the Shuttle Avionics IntegrationLaboratory before being assigned to his first mission.

Tanner also served as part of the Astronaut SupportPersonnel team at the Kennedy Space Center, supporting Space Shuttle launchesand landings, and as EVA Branch Chief. A veteran of three space flights Tannerhas logged over 742 hours in space, including over 33 EVA hours in 5 spacewalks. He flew on STS-66 in 1994, STS-82 in 1997 and STS-97 in 2000. Tanner isassigned to the crewof STS-115. The mission is targeted to launch in 2006.

SPACE FLIGHT EXPERIENCE: Tanner flew aboard the SpaceShuttle Atlantis on the STS-66,November 3-14, 1994, performing the Atmospheric Laboratory for Applications andScience-3 (ATLAS-3) mission. ATLAS-3 was the third in a series of flights tostudy the Earth's atmosphere composition and solar effects at several pointsduring the Sun's11-year cycle.

The mission also carried the CRISTA-SPAS satellitethat was deployed to study the chemical composition of the middle atmosphereand retrieved later in the mission. Tanner logged 262 hours and 34 minutes inspace and 175 orbits of the Earth.

Tanner performed two space walks as a member of theSTS-82 crew to service the HubbleSpace Telescope (HST) in February, 1997. The STS-82 crew of 7 launchedaboard Space Shuttle Discovery on February 11 and returned to a night landingat Kennedy Space Center on February 21.

During the flight, the crew completed a total of 5space walks to improve the science capability of the telescope and replaceaging support equipment, restoring HST to near perfect working condition. Thecrew boosted HST's orbit by 8 nautical miles before releasing it to once againstudy the universe. Tanner's two space walks totaled 14 hours and 01 minutes.The flight orbited the earth 150 times covering 4.1 million miles in 9 days, 23hours, 37 minutes.