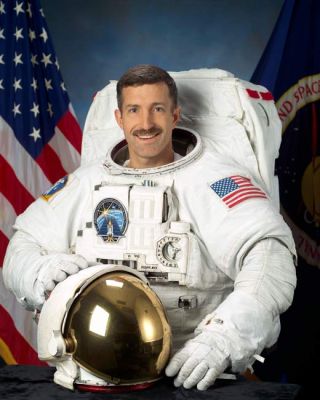 EDUCATION: Graduated from Tolland High School,Tolland, Connecticut, in 1979; received a Bachelor of Science degree inelectrical engineering from the U.S. Coast Guard Academy in 1985, and a Masterof Science degree in aeronautical science from Embry-Riddle AeronauticalUniversity in 1990.

SPECIAL HONORS: Awarded the Orville WrightAchievement Award and honorary membership in the Order of Daedalians as the topnaval flight training graduate during the period January 1 to June 30, 1988.Awarded Texas Society of the Daughters of the American Revolution AchievementAward as the top Coast Guard graduate of flight training for the year 1988.

EXPERIENCE: Burbank received his commissionfrom the U.S. Coast Guard Academy in May 1985, and was assigned to the CoastGuard Cutter Gallatin (WHEC 721) as Deck Watch Officer and Law Enforcement/BoardingOfficer.

In January 1987, he reported to naval flight trainingat Pensacola, Florida, and graduated in February 1988. Burbank was thenassigned to Coast Guard Air Station Elizabeth City, North Carolina, where hebecame an Aircraft Commander in the HH-3F Pelican and then an AircraftCommander/Instructor Pilot in the HH-60J Jayhawk.

In May 1995, he was assigned to Coast Guard AirStation Sitka, Alaska, as the Aeronautical Engineering Officer and HH-60JAircraft Commander. Burbank has logged over 3,500 flight hours, primarily inCoast Guard helicopters, and has flown more than 1,800 missions including over300 search and rescue missions.

NASA EXPERIENCE: Selected by NASA in April 1996, Burbank reported tothe Johnson Space Center in August 1996. After completing two years of trainingand evaluation, Burbank worked technical issues for the Astronaut OfficeOperations Planning Branch, and the International Space Station, and served asCAPCOM (spacecraft communicator) for both Shuttle and Space Station. He wasalso a member of the Space Shuttle Cockpit Avionics Upgrade design team. He flewas a mission specialist on STS-106 and has logged over 283 hours in space.Burbank is assigned to the crew of STS-115. The mission is targeted to launchin 2006.

During the 12-day mission, the crew successfullyprepared the InternationalSpace Station for the arrival of the first permanent crew. The fiveastronauts and two cosmonauts delivered more than 6,600 pounds of supplies andinstalled batteries, power converters, oxygen generation equipment and atreadmill on the Space Station.