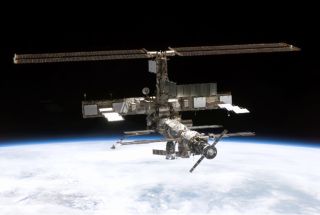 This full view of the International Space Station was photographed by an STS-114 astronaut aboard the space shuttle Discovery following the undocking of the two spacecraft on August 6, 2005.
(Image: © NASA.)

On Nov. 2,2000, the firstthree long-duration astronauts took charge of the ISS, beginning an unbrokenchain of missions that stretches across 12 expeditions and has weathered oneNASA disaster, a crew cutback and a series of construction delays.

"We areproud to celebrate an important accomplishment in space," Tokarev said during arecorded statement by the Expedition 12 crew for the station's fifthanniversary. "This would not have been possible without the cooperation of the 16partner nations."

Stillunfinished, the ISS is a cooperative effort between NASA, Russia's FederalSpace Agency and the multi-national European Space Agency (ESA), as well asCanada, Brazil and the Japan Aerospace Exploration Agency (JAXA).

"The internationalnature of the thing is totally essential," said Alan Thirkettle, head of developmentfor the ESA's Directorate of Human Spaceflight, in a telephone interview. "Wewouldn't have been able to build a space station ourselves."

It's takenabout 17 shuttle flights, a series of unmanned Russian supply ships and 62spacewalks to build and maintain the ISS so far. Expedition 12's McArthur andTokarev plan to make their first spacewalkon Nov. 7.

NASA spokespersonMelissa Matthews told SPACE.com Tuesday that, to date, the ISS has cost theU.S. space agency about $23.5 billion - research costs excluded - though ESAprojections state the station's total cost could exceed $100 billion spreadacross the participating nations. NASA hopes to launch 18 moreshuttle flights to the ISS and complete construction by 2010, when theagency plans to retirethe orbiters, as well as fly one Hubbleservicing mission.

Despite aninterior living space about the size of a three-bedroom home, the ISS remainsfar from complete.

Station constructionhas been waylaid first by NASA's tragic loss of the space shuttle Columbia and its crew in 2003,then by delays caused by multiple hurricanes andongoing work to limitthe amount of potentially harmful debris shed by orbiter fuel tanks duringlaunch - a problem that doomed Columbia and appeared during the launchof Discovery's STS-114mission on July 26. Discovery's flight marked the first shuttle to visit theISS since the Columbia accident.

Prior tothe Columbia disaster, station planners were targeting 2004 for the completionof the U.S. contribution to the project, NASA officials told SPACE.com.

NASA'sthree remaining orbiters - Discovery, Atlantis and Endeavour - are vital to thespace station's construction since only they can haul many of the heavy modulesand supply containers to the orbital research platform. But the 2010 retirementdate has limited the number of flights - once slated to require about 28 missions -that may be available.

"We'vetalked to the partners about the results of the shuttle [schedule] and stationconfiguration options, and that is one of the key elements," explained NASAspokesperson Debra Rahn, of the agency's Washington D.C. headquarters. "We'restill working with the international partners on the order of the flights."

Rahn saidat least two large components - a centrifuge module built for NASA by theJapanese Aerospace Exploration Agency (JAXA) and Russia's Solar Power Platform- have been cutfrom the shuttle's manifest. Any more changes could be discussed during aplanned meeting of the "Heads of Agencies" meeting in early 2006, she added.

Otheritems, like the space station's Cupolawindow, that sit at the end of the shuttle's launch manifest could also be atrisk of not flying should delays prompt further flight reductions, Matthews said.

Some of NASA'sinternational partners are looking not only toward the resumption of ISSconstruction, but also space station landmarks of their own.

ESAofficials are eager to see NASA's STS-121 mission launch in May2006 since it will carry the space agency's first long-duration astronaut, ThomasReiter of Germany, to the orbital outpost. Reiter's planned flight will notonly extend European space science missions beyond their eight-day ISS stays,it will also allow ESA scientists a chance to perform some science originallyslated for the Columbus module.

"We'redesperately anxious to get Columbus up," Thirkettle said. "Having 10 tons ofhardware sitting around in Bremen, or even in Florida, doesn't do a lot foryou."

Thirkettle concedesthat there has been some benefit from the ISS construction delays. The addedtime has allowed engineers to add new, up-to-date equipment to the module and addressissues with the interior finishing of the Columbus module at its factory.

"It gave usthe opportunity of completely cleaning that up and replacing it rather thandoing a botch up and keeping our fingers crossed," Thirkettle said, adding thatscience payloads are once again being reinstalled into Columbus.

ESAengineers are also recertified the space agency's European Robotic Arm - an 36-foot(11-meter), seven-jointed robot arm - to launch aboard a Proton rocket with theRussia's Multipurpose Laboratory Module in November 2007. The 1,388-pound(630-kilogram) arm was slated to ride a shuttle into space as part of theRussian power platform, but was reassigned to the MLM after the module'sredesign, Thirkettle said.

"It's likethe station's arm, capable of walking from base point to base point,"Thirkettle said, adding that it will be able to pluck payloads from an airlockaboard the new Russian module's and place them on the ISS exterior.

Meanwhile,the ESA has experienced some delays of its own. The agency's first AutomatedTransfer Vehicle (ATV), an unmanned cargo ship designed to resupply theISS, will not launch toward the space station until at least May 2007 afterinspections turned up multiple hardware and software problems.

Japan isalso developing its own H-2 Transfer Vehicle (HTV) to deliver additional cargoto the ISS. Both the ATV and HTV will complement Russia's unmanned Progressvehicles that steadily resupply the space station today.

Last week,NASA astronauts laudedthe space station as a testing ground for the space agency's goal of returninghumans to the Moon and pushing out toward Mars.

During thetwo-year gap in ISS-bound shuttle flights, while NASA worked to recover fromthe Columbia accident, station crews were reduced to two astronauts, which ledto the first spacewalksever to leave the orbital platform empty of humans, additional ground control operationsof the ISS, and a series of repairsthat would have previously been performed back on Earth only after the faultyhardware had been shipped off the outpost. In 2004, for example, Expedition 9 flightengineer Michael Fincke demonstratedthat astronauts could make unplanned, meticulous repairs of the U.S.-builtspacesuits in orbit.

"One of thethings we're really learning from the space station is how things break," saidExpedition 7 flight engineer Ed Lu during the Oct. 27 event, adding that muchof the equipment aboard the ISS is being flown for the first time. "The onlyway to get to the reliability levels we need is to have these things fail, andthen iron out the bugs. I think we're doing that."

Lu servedaboard the station's first two-astronaut crew - down from three astronauts - whichhas subsequently been followed since by five others. The loss of an extraperson has limited the amount of scientific research astronauts are able toperform, since much of their time is devoted to maintenance and otheractivities. Expedition 11 flight engineer John Phillips, who returnedto Earth with mission commander Sergei Krikalev on Oct. 10, told SPACE.comthat he was unable to perform all of the experiments he'd hoped due to timepressure.

"I thinkthat with a two-person crew here, I was optimistic," he said in an Oct. 6 interview.

But theastronauts agreed that the experience of assembling massive structures inspace, learning how the human body copes with long duration spaceflight and thedaunting task of many nations working together toward a single orbital goalwill pave the way for future space explorers to reach beyond Earth orbit.

"We'redoing something really special that's bigger than any one of us," Fincke saidlast week. "Here's to five more years and beyond."