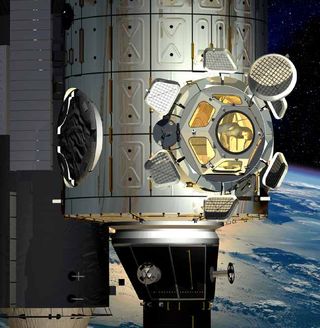 The Cupola module for the International Space Station (ISS) will serve as an observiation and flight control port for future astronaut crews. It is slated for launch in 2009 and to be attached to Node 3 of the space station.
(Image: © ESA/Ducros.)

European engineers are sending a space control tower to NASA today, a combination window and flight control center to be used by future astronauts aboard the International Space Station (ISS).

Called the 'Cupola' by its builders, the new ISS segment is on its way to NASA's Kennedy Space Center in Florida for final testing before taking its place in line according to the station's assembly launch schedule, European Space Agency (ESA) officials told SPACE.com.

Built by Italy's Alenia Spazio, the Cupola is ESA's latest contribution for the space station assembly and should last about 10 years in orbit. The module's primary function will be as a flight control center for the ISS during spacewalks, spacecraft maneuvers or work requiring the station's robotic arm.

"The Cupola is the eyes of the space station, much like the control tower of an airport," said Dieter Isakeit, of ESA's Directorate of Human Spaceflight, in a telephone interview. "It's important because astronauts, now, really don't have a good view outside the station."

At 6.5 feet wide (2 meters) and 5 feet high (1.5 meters), the dome-like Cupola is forged from a single 1.8-ton chunk of aluminum with slots for six trapezoid-shaped windows and one large circular viewport that will be the largest window to fly in space when launched.

"This is a really a panoramic view," Isakeit said, adding that when not in use, a set of external shutters - one per window - clamps over the viewports to protect the glass from micrometeorite impacts. The shutters are also designed to help maintain the temperature within the ISS.

Up to two station crewmembers can sit inside the Cupola to monitor spacecraft docking and undocking, or - once larger crews return the ISS - support spacewalking astronauts outside.

Current ISS crews are limited to two astronauts as NASA works to return its shuttle fleet to flight status after the Feb. 1, 2003 loss of the Columbia shuttle and its astronaut crew.

While the Cupola is expected to be primarily use to keep tabs on spacewalking crews or control the station's robotic arm, ESA officials believe it could also serve a more personal purpose for ISS astronauts.

"There are psychological elements," Isakeit said of the Cupola. "You can see the universe, you can see back down on Earth...so it can be used for ad hoc observation."

Should an entire window need replacement, ISS crews can fit a pressure cover over the viewport during a spacewalk, then swap it with a new window from inside the station, ESA officials said.

The Cupola is currently slated for launch in January 2009, waiting in line with ESA's Columbus Laboratory module at KSC when its transatlantic voyage is complete. It is for installation onto Node 3, an interconnecting ISS module also being provided by ESA. In addition to the Columbia module, ESA has already delivered the station's Node 2 to the NASA center, ESA officials said.