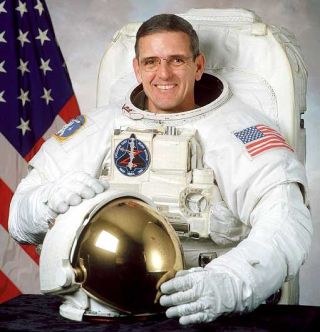 NASA plans to return theInternational Space Station crew to its original size of three on the secondpost-Columbia shuttle mission.

NASA and its internationalpartners have named the station's 12th crew.

American astronaut BillMcArthur and Russia's Valery Tokarev will fly to the station on a Soyuz rocketin the fall. McArthur, who lived on the station once before, will be thestation's commander.

Thomas Reiter, a EuropeanSpace Agency astronaut, will be part of their crew too. He will arrive aboardthe shuttle Atlantis on the second shuttle mission since the 2003 disaster.

That mission is scheduledfor September, so Reiter's six-month stay could overlap the changeover from onecrew to the next.

NASA said Reiter'sassignment is part of a deal between the Russians and Europeans.

The station's crew was cutfrom three members to two after the shuttle disaster, because the absence ofthe shuttles severely limited supplies, including food, water and breathing air.

Reiter will return to Earthon a later shuttle or Soyuz flight.

A Kennedy Space Center launch team will wait until at least Thursday to get a new weather satellite offthe ground from California.

NASA rescheduled the launchfor Thursday after a connector hose came loose during the countdown toSaturday's liftoff of a Boeing Delta 2 rocket from Vandenberg Air Force Base in California.

The launch window for theNOAA-N weather satellite opens at 6:22 a.m. Eastern time and extends for 10minutes. The satellite will be used for forecasting and climate research