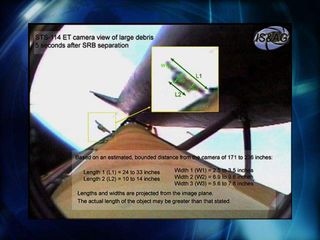 An image from an onboard camera during Discovery's launch shows the chunk of foam that has led to a grounding of the fleet. The picture was released July 27.
(Image: © NASA)

The problem is similar towhat occurred in the disastrous Columbia flight in 2003 and was thought to havebeen fixed.

Space shuttle officials saidthat while there is currently no indication the foam contacted the Discovery orbiter, the incident should not have happened in the firstplace and is reason enough to put a hold on future flights.

Images taken of the externaltank in orbit identified the foam separation, and also detailed additionalareas where the material pulled loose from its tank, they said.

It is NASA's first shuttleto fly since the loss of the space shuttle Columbia in 2003, which was fatallystruck by falling foam debris during launch. The briefcase-sized foam chunk hitColumbia's left wing back then, gouging a hole in its heat shield that led tothe orbiter's destruction -- and the deaths of all seven astronauts aboard --during reentry on Feb. 1, 2003.

The foam shed duringDiscovery's Tuesday launch originated on a protuberance air load (PAL) rampthat juts out from the orange external tank and protects vital cables, wiringand pressure lines running along its length. Current estimates place it between24 and 33 inches long at its longest point and up to 8 inches wide.

'We need to dobetter'

NASA has spenttwo-and-a-half years redesigning portions of the shuttle's external tank toprevent exactly such foam loss, and early discussions on the need to addressthe PAL ramp -- which is swathed in thick foam layers -- ended with engineersbelieving no changes were needed. External tank project manager Sandy Colemansaid the modifications had resulted in "the safest, most reliable tank wehave ever built" for the shuttle program when the first of three new unitswere delivered to NASA's Kennedy Space Center in January 2005.

The tank used by Discoveryin Tuesday's launch was the second of those tanks delivered.

"We need to do betterthan this," said Wayne Hale, deputy shuttle program manager, during thebriefing, adding that it was fortunate the incident occurred when it did."If this had happened earlier, it would have been bad."

Because of Discovery's highaltitude at the time of the PAL foam loss, there was not enough air to sweep itback fast enough to impact the orbiter, Hale added.

The space shuttle Atlantis,being prepared to launch in September, will not fly before shuttle engineersfully understand and address the PAL ramp foam loss, shuttle officials said,adding that they did not know if any fix could be implemented in the nextmonth, three months or by the end of the year. Discovery was slated to flyafter Atlantis.

NASA's third, and last,remaining shuttle -- Endeavour -- is currently in its major modificationperiod.

"We feel very confidentof Discovery's thermal protection system, but we are looking into this,"Parsons said.

In addition to the PAL rampincident, a chunk of foam separated near the tank's bipod structure, where its connected to the forward section of Discovery. Shuttleofficials made modifications to the foam application in that region, and weresurprised to see foam loss there, Parsons said.

"We need to takeanother look at that," he added.

A short distance beneath thebipod, in a region known as acreage foam, another smalldivot appeared. Acreage foam is applied to the external tank by machine, aprocess NASA engineers made no changes two in the last two years.

"Personally, I'mdisappointed," Parsons said of the foam loss, but added that it wasadvantageous that it occurred without harming Discovery. "We learnedsomething. What if this hadn't happened and we flew five, six or seven[missions] down the line?"

Hale said that images takenby an external tank-mounted video camera caught the small chip flying offDiscovery during the launch. Also in the image was a small white area on theshuttle's belly that will be an "area of interest" when the orbiterexposes its underside to the space station astronauts for photographs.

"Are we concerned?We're treating it very seriously," Hale said of the apparent tile damage."Are we losing sleep at night? Not yet."

The STS-114 crew will likelytrain the cameras aboard the orbital boom sensor system on the chipped tileregion during a three-hour block of time on July 29 already set aside forfollow up inspections to Discovery's thermal protection system, Hale added.

The crews of both Discoveryand the International Space Station -- where two astronauts plan to takeextremely high resolution images of the shuttle's tile-covered belly earlyThursday - have been notified, and data packages uplinkedto their vehicles for analysis, Parsons said.

"They were very glad toget [the data] and there will be more discussions about it tomorrow,"Parsons said.

While no new space shuttleswill fly for the time being, NASA will not stop preparations for the follow-upto Discovery's mission, the STS-121 spaceflight aboard the Atlantis orbiter.Atlantis is already mated to its own external tank-solid rocket booster launchstack, and was slated for a Sept. 9 liftoff before today's foam find. NASA alsotapped Atlantis to serve as a rescue ship for the STS-114 crew in the remotechance Discovery were too damage to return home and its astronauts forced totake shelter aboard the space station. That contingency rescue mission is knownas STS-300.

"We think the need foran STS-300 is remote at this time," said Wayne Hale, deputy shuttleprogram manager, during the briefing.

But Parsons said that shouldit be needed, the decision would be "very difficult."