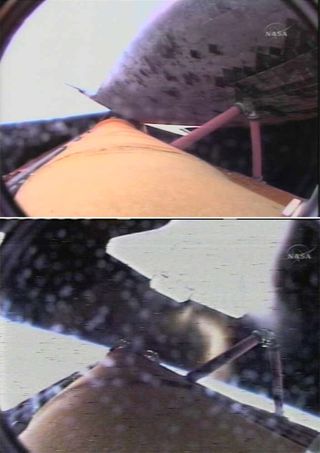 These views taking by a video camera mounted to the external tank of space shuttle Discovery shows the orbiter both attached and pulling free from the 15-story vessel.
(Image: © NASA/KSC)

"I think the tank performed very, very well indeed," said Wayne Hale, NASA's space shuttle manager during an evening press briefing here at the Kennedy Space Center (KSC). "We saw nothing that gives us any kind of concern about the health of the crew of the vehicle."

Hale's comments came after a quick first-look at imagery of Discovery's launch, arrival in orbit and the jettison of its external tank after the spacecraft and its seven-astronaut STS-121 crew launched into space on July 4 at 2:37:55 p.m. EDT (1837:55 GMT).

During that cursory look at a veritable flood of images, video and radar data, shuttle analysts found seven instances - of which five are related to fuel tank foam debris - of objects falling from Discovery's launch stack.

"We put the tank under a microscope this time," Hale said. "It did not perform flawlessly, in that we lost some foam off the tank apparently."

Of just the foam instances, all of the incidents occurred well after they could have been a damage concern, the foam pieces in all but one of the events were too small to be a risk to the shuttle, Hale added.

Here's a rundown of the some of the debris events seen during today's space shot:

"It's all very minor, it's all very light," Hale said. "We don't see any concerns for the orbiter, but of course we will do a 100 percent inspection of the heat shield."

Hale said he hopes shuttle engineers will give Discovery's heat shield a clean bill of health by Flight Day 5, or July 9.

The biggest modification between the external tank that fueled Discovery's STS-121 launch spaceward today and the orbiter's STS-114 launch last July - the removal of a protective foam ramp that screened a cable tray and pressurization lines from wind stresses during flight - appears to have performed exactly as expected, Hale said.

The ramp shed a one-pound piece of foam debris during Discovery's July 2005 launch on STS-114. The debris did not strike the orbiter, but was unacceptably large for NASA's safety standards.

A wispy, tumbling white object, which STS-121 mission specialist Michael Fossum reported as a possible fragment from the protective thermal blankets covering Discovery, turned out to be ordinary ice that formed around one of the shuttle's three main engines during launch, Hale said.

"It's incredible to me but I've seen it so I know it's true, that the space shuttle's main engines that burn hydrogen and oxygen at 6,000 degrees on the inside, can form frost on the outside," Hale said, adding that a super-chilled liquid hydrogen flowing through cooling lines leads to the ice. "So that is not an issue."