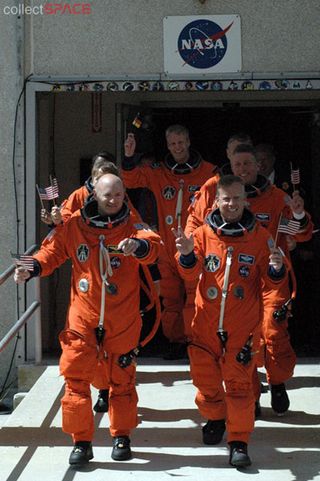 The STS-121 crew displays the spirit of the Fourth of July holiday with their flags and their eagerness to launch as they stride out of the Operations and Checkout Building. Leading the way are Pilot Mark Kelly (left) and Commander Steven Lindsey (right). Behind them are Mission Specialists (second row) Lisa Nowak and Michael Fossum; (third row) Stephanie Wilson and Piers Sellers; and (at the rear) Thomas Reiter, who represents the European Space Agency.
(Image: © collectSPACE.com)

CAPECANAVERAL, Fla. - NASA celebrated the Fourth of July with some rockets of itsown Tuesday as the space shuttle Discovery launched its seven-astronaut crewinto orbit.

"I can'tthink of a better place to be here on the Fourth of July," said Steven Lindsey,commander of Discovery's STS-121 mission. "We're hoping to very soon get you anup close and personal look at the rocket's red glare."

The crewwaved small American flags - Reiter waved the banner of his native countryGermany - as they headed out to the launch pad.

"He waspsyched," said NASA astronaut Scott Kelly, identical twin brother of STS-121pilot Mark Kelly, adding that today's launch brings him closer to his owncommand - STS-118 to launch next year. "An hour ago I was fifth in line, now I'mfourth."

Scott Kelly watched his brother rocket spaceward with their parents at nearby Banana River, he said.

Poorweather thwarted two launch attempts in as many days beginning on July1, though neither day had as good a weather outlook as today.

NASA hasnever before launched a space shuttle on July 4th but did land theColumbia orbiter and its two-man crew during the STS-4 mission in 1982.

"I have tosay the very first time I experienced a launch I thought, 'Well this is prettycool,'" Shana Dale, NASA's deputy administrator, told SPACE.com beforetoday's launch. "But I never expected the sense of patriotism I felt when thespace shuttle went off...it's just one of those proud moments that you have. Youthink, 'Wow, I'm proud to be an American and this is the United States spaceprogram.'"

Reilly saidhe was especially excited for Fossum, Nowak and Wilson, the first-timespaceflyers of STS-121. He plans to send them an e-mail later today to welcomethem to space.

A thrusterheater thermostat glitch, since resolved, occurred during Discovery'sinitial liftoff attempt, and launch controllers set aside a circuit breakerglitch that popped up today since a redundant system was working properly.

Shuttleofficials also concluded Monday that a smallpiece of foam insulation which fell from the shuttle's external tank was nota major concern for today's space shot. The three-inch piece of foam,weighing less than one-tenth of an ounce, fell during scrub turnaroundoperations to ready Discovery for today's launch.

Missionmanagers were primarily concerned that ice could form inside the small divotleft from the foam loss, but a launch day inspection team found no traces ofice build-up in the area once Discovery's 526,000-gallon tank was fueled withits super-cold liquid hydrogen and liquid oxygen propellant.

Discovery'slaunch today came almost one year after its last spaceflight - NASA's STS-114 return to flight mission- and will allow its STS-121 crew to make crucial fixes to the ISS, as well astest the stability of a 50-foot (15-meter) boom as a work platform for orbiterrepair.

Theastronauts will also return the station to its three-astronaut capacity anddeliver more than two tons of food, equipment, new tools and other supplies foruse aboard the ISS. NASA hopes the flight will clear the way to resume ISSconstruction.

"Thisflight's like the plug in the bottle," said Reilly, who will fly aboard NASA'sSTS-117 shuttle flight to install new solar wings aboard the ISS next year. "Toget them off the planet, it starts the assembly sequence for the rest of us."

AmongDiscovery's cargo is a U.S.-builtoxygen generator that will ultimately allow the ISS to support six-personcrews, a freezer to store biological samples, and a set of centrifuges to testhow plants grow in under different gravity conditions. The latter experiment,NASA officials said, could aid in crop plans for eventual long-duration stayson the Moon or Mars.

"We have apretty exciting mission in front of us," William Gerstenmaier, NASA's associateadministrator of space operations, has said. "We're looking forward to allthat...the teams have done a great job."

But it'sbeen a long road to orbit for the STS-121 crew.

Discovery'slaunch was watched by myriads of onlookers and more than 100 NASA cameras andradar tools, which scanned the shuttle's ascent for signs of foam insulationdebris falling from the orbiter's 15-story fuel tank.

Heat shielddamage from such foam debris could seriously jeopardize the spacecraft'sability to return to Earth, as proven during the shuttle Columbia's STS-107launch. A foam strike in that 2003 shuttle launch breached the orbiter's heatshield along its wing leading edge, critically wounding the spacecraft andleading to its destruction and the loss of seven astronauts during atmosphericreentry.

NASAredesigned portions of shuttle fuel tanks to reduce the risk of catastrophicfoam shedding events, but were surprised when a large piece of insulation wasseen falling from a wind deflecting ramp during Discovery's STS-114 mission. That ramp hassince been removed,a change that will be scrutinized along with a series of icefrost ramps in the imagery received by NASA observers.

"I'm verypleased they've taken what seems to be the right amount of time and theappropriate amount of effort to get the answers that they need," said NASAastronaut Stephen Robinson, who conducted three spacewalks during the STS-114

NASAshuttle engineers and managers will evaluate imagery from ground-based cameras,as well as from orbital inspections by the STS-121 and ISS crews, to determinewhether Discovery is safe to return to Earth with its astronaut crew. Thatdecision is expected around Flight Day 6, or July 9, NASA has said.

"There aremany, many issues, the foam is just one of them - there inspections issues andso forth - that we're eager to find out the data," said Pamela Melroy,commander of NASA's STS-120 mission to deliver a connecting node that willallow the expansion of the ISS, in an interview.

The workday doesn't stop after launch for the STS-121 astronaut crew.

"These guysare going to be working from the moment the engines shut down to wheel stop,"said NASA astronaut Andy Thomas, who served as a mission specialist on theSTS-114 return to flight mission and helped brief the STS-121. "They're justgoing to be just go, go, go."

Just afterreaching orbit, the astronauts are expected to unstrap themselves from theirseats and conduct a still and video photographic survey of their discardedexternal tank. The images will then be sent down to flight controllers foranalysis to determine how the PAL ramp removal performed and pinpoint any othertrouble areas that may have shed foam insulation during launch.

Discovery'spayload bay doors have to be opened - an activity currently slated for 4:03 p.m.EDT (2003 GMT) - in order to deploy the spacecraft's radiators and allow theshuttle to dock at the ISS on Monday. The crew won't get to sleep today untilabout 8:38 p.m. EDT (0038 July 5 GMT) in order to be fresh for the first ofseveral crucial inspections of Discovery's heat shield using the orbiter'ssensor-laden boom, NASA has said.

"The spaceshuttle is an amazing, awe-inspiring expression of human capability," Thomassaid. "It's breathtaking."

Discovery'sSunday STS-121 launch marked the 32nd flight for the orbiter and the115th shuttle launch for NASA. The space shuttle is expected toreturn to Earth on July 16.

TheAssociated Press contributed to this report.