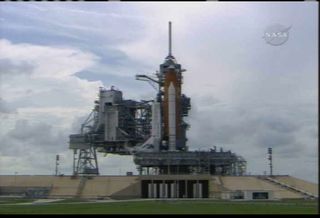 Shuttle Discovery on Pad 39B after a scrubbed launch attempt due to weather concerns.
(Image: © NASA)

CAPE CANAVERAL, Fla. - NASA's space shuttle Discovery will have to wait at least one more day to reach orbit after thick clouds prevented a Saturday attempt.

NASA called off Discovery's planned launch of its STS-121 mission just minutes before the space plane was slated to launch seven astronauts toward the International Space Station (ISS) at about 3:49 p.m. EDT (1949 GMT) from Pad 39B here at NASA's Kennedy Space Center (KSC) spaceport. NASA hopes that Sunday's weather will be more cooperative.

"It's just not a good day to launch the shuttle," NASA launch director Michael Leinbach told the STS-121 astronaut crew after it became clear Discovery could not fly today.

Thick anvil clouds - a potential source of lightning during a shuttle launch - prevented Discovery's liftoff despite favorable conditions earlier in the day. They were within 20 miles - too close - of NASA's Shuttle Landing Facility, which would serve as an emergency runway should the STS-121 crew be required to abort their mission in mid-flight and return to Earth. The clouds were also in range of Discovery's Pad 39B launch site and would have been over the actual pad when the countdown was expected to reach zero, weather officials said.

"I don't have a lot of hope at this point," said STS-121 ascent flight director Steve Stitch, from mission control in NASA's Houston, Texas-based Johnson Space Center, about 20 minutes before Discovery's planned launch.

"It just wasn't our time today, we hope that tomorrow looks better," Lindsey told flight controllers after the scrub.

Launch officials will now work to extract the two-woman, five-man STS-121 crew from inside Discovery and prepare the spacecraft for a 24-hour turnaround. If Sunday's weather holds, Discovery could launch at 3:26 p.m. EDT (1926 GMT), NASA officials said. Pad crews will also have to drain all 526,000 gallons of supercold propellant from Discovery's external tank.

The average cost of a weekend launch scrub is about $600,000, NASA officials have said.

Shuttle weather officials gave Discovery a 60 percent chance of launching into orbit today, with only a 40 percent chance poor weather could prevent the flight. But the weather turned sour as the countdown wore on.

"You always have to worry about the weather," NASA astronaut Scott Kelly, identical twin brother of STS-121 pilot Mark Kelly, told SPACE.com before launch. "It is always an issue."

"The crew and Thomas were really concerned that tomorrow would be the only good day because the next day's weather," Eyharts told SPACE.com Friday after speaking with the STS-121 astronauts.

Additional launch opportunities are possible on Sunday and Monday, but forecasts predict a 60 percent chance that poor weather will plague those space shots. For partly that reason, launch officials waited until the last possible moment during a planned countdown hold today until it became clear that the weather would not cooperate with today's planned space shot.

"We played it to the end and we ended up scrubbing," Leinbach said after the scrub. "We'll try again tomorrow."

Shuttle weather officer Kathy Winters has said that each day of delay does move Discovery's launch time about 23 minutes earlier in the day, which could allow the spacecraft to lift off before storm threats become an issue. But even so, the forecast for Sunday looks bleak.

Shuttle weather officials give Discovery only a 40 percent chance of launching tomorrow, largely due to the same cloudy concerns that plagued today's stalled countdown.

"Tomorrow's really setting up to be almost a repeat of today," Leinbach said. "We were not going to launch today unless it was safe to do so, and today it was not."

Discovery's launch window stretches from July 1 to July 19, after which NASA would have to reset for the next opportunity - currently allocated to the STS-115 mission - which runs from Aug. 28 through Sept. 14.

The mission is also set to allow Reiter, the ESA's first long-duration astronaut to make an extended stay the ISS, to join the space station's current two-man crew of Expedition 13.

Thruster glitch not an issue

The weather delay came after engineers resolved a launch day glitch with one of Discovery's small attitude control jets. Shuttle engineers decided Saturday that a malfunctioning thruster heater thermostat should not prevent Discovery's next launch attempt.

Vernier engines are small thrusters used by astronauts to tweak a shuttle's position in orbit. There are six such engines on every space shuttle: two in the nose, and two on each of the bulbous Orbiter Maneuvering System (OMS) pods nestled near the spacecraft's tail. Thermostats and heaters are used to prevent the engines from freezing in the cold vacuum of space.

The suspect heater thermostat is located on one of two vernier thrusters on the left OMS pod. Each vernier has two heaters, though engineers are unsure what prompted a thermostat to fail on the faulty engine during today's launch countdown.

Mission managers decided they could work through the thruster glitch during Discovery's 12-day spaceflight. If necessary, the thruster could be turned off altogether, NASA officials said.

The STS-121 astronauts could perform attitude control and docking activities using a Discovery's primary thruster system, a network of 38 larger maneuvering jets. The space station itself could take over attitude control responsibilities once the orbiter arrives at the ISS.

"It's not ideal, but we are trained to handle it," said astronaut Scott Kelly, who will command NASA's STS-118 shuttle flight to the ISS next year, told SPACE.com.

NASA officials said the STS-121 astronaut may not even have to worry about firing Discovery's maneuvering jets once they reach the space station.

Two unmanned Russian Progress cargo ships, each capable of firing their engines to control the joint ISS-Discovery stack after docking, are moored to the orbital laboratory. The space station's Russian-built Zvezda service module also has a set of engines available. During normal operations, the ISS also relies on a set of four, U.S.-built gyroscopes to maintain its orientation.