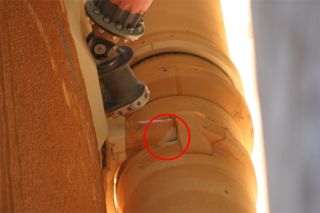 Image of the external fuel tank area showing the liquid oxygen feedline bracket. The location of the foam crack is circled in red.
(Image: © NASA)

CAPE CANAVERAL, Fla. - NASA will forge ahead with plans to launch the space shuttle Discovery Tuesday despite losing a small piece of foam insulation from the orbiter's external tank.

"We're go to continue with the launch countdown," William Gerstenmaier, NASA's associate administrator of space operations, told reporters here at Kennedy Space Center (KSC). "I don't think we're taking any additional risks than we did in our original [flight] assessment."

Discovery is now back on track to launch NASA's STS-121 mission on July 4. Liftoff is currently set for 2:37:55 p.m. EDT (1837:55 GMT), with current weather forecast predicting a 60 percent chance of favorable conditions for flight.

Monday's launch decision comes after a more than two-hour discussion among top shuttle mission managers - and some inventive thinking by pad engineers - to evaluate the foam loss, which occurred during a standard post-scrub inspection Sunday.

The foam fragment weighed just 0.0057 pounds - or less than one-tenth of an ounce - and fell from the uppermost bracket connecting a 17-inch liquid oxygen feedline to Discovery's orange external tank. The fragment was less than half the weight of the upper limit for acceptable launch debris, and would not have caused critical damage to Discovery if it popped free during launch, NASA officials have said.

Gerstenmaier said there were no objections on the decision to fly from any members of the STS-121 Mission Management Team, NASA chief Michael Griffin or the spaceflight's seven-astronaut team - commanded by veteran spaceflyer Steven Lindsey - which listened on today's discussion from their crew quarters via telephone.

Among the top concerns surrounding the lost foam revolved around whether ice, a potential launch debris risk, would build up in the affected area.

In a worst case scenario, up to 0.0024 pounds of ice could fill in the divot left by the liberated foam piece, Gerstenmaier said, adding that the projection is just within acceptable limits.

Foam insulation is used to prevent ice build-up on Discovery's external tank when it is loaded with the super-cold liquid oxygen and liquid hydrogen propellants that will feed the shuttle during launch.

Gerstenmaier said ice from condensation that formed while engineers were empting the 526,000-gallon shuttle fuel tank after Sunday's launch scrub, and the normal expansion of the vessel as it warmed, led to the foam loss. A similar event occurred during launch preparations during NASA's STS-51 launch preparations in 1993.

"It's a known foam loss mechanism," Gerstenmaier said, adding 2005 tests show that the rigors of emptying Discovery's fuel tank are harder on its insulation than a launch. "We have actual test data that shows that the de-tanking environment puts more stress on the foam ascent environment."

A team of inventive engineers clinched Discovery's July 4th launch target by mounting a small camera to a flexible pipe, which allowed them to collect vital video of the damaged foam area on the shuttle's external tank. Without the quick thinking, pad workers would have had to use a platform along the Rotating Service Structure at Discovery's Pad 39B launch site to view the area, which would have forced NASA to delay the space shot until Wednesday, shuttle officials said.

NASA has worked for more than three years to reduce the risk of large chunks of external tank foam debris from popping free during shuttle launches and striking orbiters in mid-flight.

It was a 1.67-pound, suitcase-sized piece of foam debris that critically damaged the space shuttle Columbia during its Jan. 16, 2003 launch and led to its destruction - and the loss of seven astronauts - 16 days later.

The problem was not wholly solved when NASA launched its first post-Columbia shuttle mission - STS-114 aboard Discovery - in July 2005. A one-pound piece of foam fell from the orbiter's external tank during launch, but the insulation did not damage the orbiter.

NASA has since removed the sources of foam from both incidents and will test the latest change - the removal of a foam-covered ramp when Discovery launches its STS-121 mission on Tuesday.