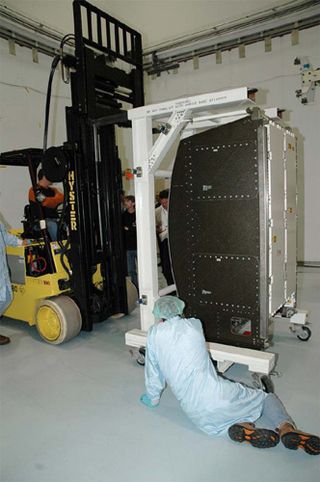 The rack containing NASA's Oxygen Generation System build for the International Space Station arrives at Kennedy Space Center where it will be installed in a cargo module for launch aboard the space shuttle Discovery.
(Image: © NASA/KSC.)

Astronautsaboard the International Space Station (ISS) will be breathing easy after thenext shuttle visit to the orbital research platform.

That flight,NASA's STS-121mission currently slated to launch in May, will deliver the U.S.-builtOxygen Generation System (OGS) to the station in the second of two ISS oxygen upgradesthis year.

"The basictechnologies are the same as the Elektron," said Bob Bagdigian, NASA's projectmanager for regenerative environmental control and life support systems, in aninterview.

Built byRussian engineers, the Elektrondevice aboard the space station uses electrolysis to separate water intohydrogen, which is dumped overboard, and oxygen. The 1,500-pound (680-kilogram)OGS rack works in much the same way, and will be able to provide 12 pounds of breathableoxygen daily under normal operations, NASA officials said.

The currentISS crew, Expedition12 commander Bill McArthur and flight engineer Valery Tokarev, have alsoinstalled an oxygen conservation system inside the station's U.S.-built Questairlock to be used before spacewalks during joint operations with a visitingshuttle, they added.

Onceinstalled and operational - a process that could take months - the OGS isexpected to increase the space station's crew capacity up to its maximumsix-person total, NASA officials said.

The largestISS crews to date have been three-astronaut expeditions, though extended delaysin station-bound shuttle flights since the 2003 Columbia accident have limited severalmissions to two astronauts each.

Bagdigian saidthe OGS was originally slated to fly aboard the station's Node 3, a hub for thebay window-like cupolaand now grounded habitationmodule, but was later reworked to function inside the U.S.-built Destinylaboratory.

The shiftwill require some adjustments to Destiny - largely to vent waste hydrogen andprovide power for the OGS - but will allow engineers a chance to shake down theoxygen system sooner and assist efforts to increase ISS crews sizes, NASAofficials said.

"We knowthat oxygen generating systems in general have a lot of problems over the yearsduring start-up," said William Gerstenmaier, NASA's associate administrator forspace operation, in a press conference last week. "We think we'll have someproblems with our oxygen generator system. We want to fly it early so we canwork those out."

TheElektron device, for example, caused recurringheadaches for flight controllers and ISS astronauts over severalexpeditions when it brokedown repeatedly after in-space repairs. The unit was brought back online,ultimately in back-up mode, once spare parts were lofted to the ISS.

NASAofficials said the OGS is one of two major parts of a comprehensive lifesupport system for the ISS. A water reclamation system, which is slated to recyclewastewater and human urine, is also under development at Marshall Space FlightCenter (MSFC) where the OGS was designed and tested.

While theOGS is waiting to launch toward the ISS from NASA's Kennedy Space Center inFlorida, the oxygen-conserving ROOBA system is waiting in orbit for nextshuttle's arrival.

"It's verysimple," explained Dan Leonard, ROOBA's primary designer for Boeing in Houston,Texas. "It's basically a hose."

The 25-foot(7.6-meter) ROOBA uses two hoses to link the space station's Quest airlock -home base for most ISS spacewalks in U.S.spacesuits - with a shuttle to draw oxygen directly from the orbiter'stanks. The measure not only conserves some ISS oxygen supplies, it also easesstrain on airlock equipment that would otherwise have to replaced during thelimited number of flights before NASA retires its shuttle fleet in 2010,Leonard added.

ROOBA willbe used by astronauts to prepare themselves for spacewalks before they exit theISS.

ROOBAarrived at the ISS aboard an unmanned Russian-built cargo ship after years ofdevelopment work on the ground, though the real test will come during theSTS-121 flight's three planned extravehicular activities, NASA officials said.

"It'salways nice to get a part on orbit," Leonard said, adding that his team willkeep a close watch on ROOBA during the upcoming spacewalks.