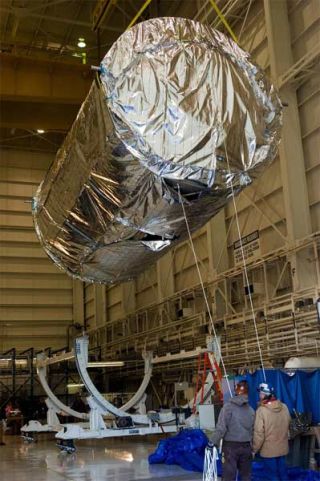 A moduleonce destined to house astronauts aboard the International Space Station (ISS)has found a new purpose as a test bed for future life support systems.

The 8,500-pound (3,855-kilogram) commonmodule was not yet modified to suit astronaut housing needs aboard the ISS dueto budget constraints that led station planners to pullthe habitation module from the launch manifest, NASA officials added.

The 29-foot (8.8-meter) long, 16-foot (4.8-meter) wide modulewill be connected to two others at MSFC that were designed specifically forlife support system research. Engineers use one existing module to studywastewater collection, while the other is filled with treadmills and hygieneequipment similar to that aboard the ISS, Carrasquillo said.

"We takethe humidity from condensation and sweat we generate and test our watersystem," she added.

The mockspace station allows engineers to simulate the atmosphere inside a spacecraftin which life support systems must function. Engineers can injectcontaminants into the air or water supplies and study how different systemsreact, Carrasquillo said.

"Right now,we're developing a candidate air system for the CEV and we'll be looking aheadto lunar base technology that will hopefully close the loop even further,"Robyn Carrasquillo, NASA's engineering manager forEnvironmental Control and Life Support Systems at MSFC, in a telephoneinterview. "Our goal is to completely close the air and water loops."