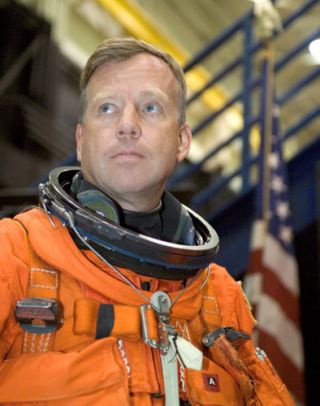 As NASA honors the memories ofastronauts lost in the pursuit of human spaceflight, the commander of theagency's next shuttle mission is also looking toward the future.

Much of the crew's mission trainingare refresher courses to maintain their skills, though several long, integratedsimulations with shuttle and ISS flight controllers are set for the nextfew months, Lindsey said.

An unacceptably large pieceof foam fellfrom the ramp during Discovery's STS-114 launchin July 2005, but did not strike the orbiter. A similar foam shedding eventdoomed Columbia'sFeb. 1, 2003 launch, when a chunk of insulation pierced the orbiter's heatshield and left it vulnerable to hot atmospheric gases during reentry.

Shuttle workers have already begunstacking the solid rocket boosters that will launch Discovery and the STS-121crew spaceward, with the shuttle itself is due to rollover to the massive Vehicle Assembly Buildingfor integration in mid-April, she told SPACE.com, adding that thosetimelines revolve around the delivery of the external tank.

Some aspects of the STS-121 missionhave changed, including the task line-up for the spaceflight's three plannedspacewalks.

"Our second spacewalk did have acouple of hours allotted for testing of the CIPAA system," Lindsey said.

"That's one of the activities thatwe feel like we've done enough investigation on," Gerstenmaiersaid, adding that there were other potential techniques that were further alongin development and offered the same repair capabilities.

In place of the CIPAA experiment,STS-121 spacewalkers Fossum and Sellers will likelyconduct ISS repairs or maintenance, Lindsey said. The crew will still place anastronaut at the end of a 50-foot (15-meter) orbitalboom--which will be attached to the end of Discovery's robotic arm--to testits stability as a repair platform, he added.

The STS-121 crew is also expecting moreof a time crunch during the early days of their spaceflight.

"Prior to docking is probably whereit affects us most," Lindsey said, adding that Reiter will assist in generalshuttle tasks, but is not trained to aid the crew during operations like thecritical heat shield inspectionusing the orbital boom.

The trio of NASA anniversaries beginning Friday, commemorating the loss of astronauts during the 1967 Apollo 1 fire, 1986 Challenger accident and 2003 Columbia tragedy, emphasizes the inherent risks of human spaceflight, but not tothe extent of preventing future exploration, Lindsey said

"We always need to [ask]...are wetaking the risks for the right benefit," he added. "I believe we are. If Ibelieved we weren't, I wouldn't take the risk to fly."