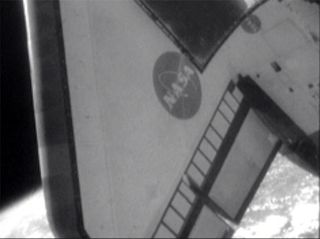 A television camera mounted on the end of Discoverys' robot arm surveys the port wing for damage in this view Wednesday, July 27, 2005. The video survey will take place on every shuttle mission in the future. (AP Photo/NASA TV)

HOUSTON -As the crew of the space shuttle Discovery prepares to bed down for the day,NASA is lauding a nearly glitch-free test of a new orbital boom that gaveflight controllers an unprecedented view of the spacecraft.

"We couldnot be more pleased with how it's all going," said Discovery's lead flightdirector Paul Hill during a status update here at NASA's Johnson Space Center(JSC). "All the new hardware is performing as we hoped."

The 50-foot(15-meter) boom can be affixed to the end of Discovery's robotic arm to surveythe orbiter's sensitive thermal protection areas, such as its wing leadingedges, nose cap and heat-resistant tiles. It is tipped with several imagingtools, including a black and white video camera, a laser ranging imager and alaser camera system.

The boom iscapable of resolving surface damage or cracks in Discovery's thermal protectionsystem as small as 1/4th of an inch, Hill said.

"We'repicking up a good survey," Kelly said as the boom scanned Discovery's nose cap,which experiences temperatures of up to 2,500 degrees Fahrenheit duringreentry.

Columbia's leftwing leading edge was damaged during launch when a piece of external tankinsulation foam gouged a hole through the one of the orbiter's heat-resistantreinforced carbon carbon (RCC) panels. That holeallowed hot atmospheric gases to enter the wing during its descent, leading tothe vehicle's destruction and the deaths of the seven STS-107 astronauts onFeb. 1, 2003. The Canadian-built orbital boom is designed to scan for suchdamage and give flight controllers and Discovery's crew a comprehensive pictureof the status of their spacecraft.

"You willalmost be able to read the serial numbers on the tiles, the images will be sogood," Hill said.

There wasone minor glitch that delayed the orbital boom survey.

A pan-tilt unitwhich connects the scanning cameras to the boom itself drifted out of positionduring an initial sweep of Discovery's right wing, prompting Thomas toperiodically reposition the sensor suit during what was typically an automatedsurvey. Flight controllers are assessing whether the drift missed any criticalareas, but believe they obtained all relevant imagery.

"Itoccurred in an area where we have a heck of a lot of overlap," Hill said of theglitch. "My assumption is that we got everything, though the pan-tilt unitslowed us down."

Thomas,Kelly and Camarda were able to make up for the losttime during their survey, NASA officials said.

"You guysdid a great job pounding through the survey," astronaut Steve Frick told thecrew during the survey.

The boomdata will be discussed during a Mission Management Team meeting today, NASAofficials said.

Hill saidthat NASA's imaging specialists were still going over video and still imagestaken during Discovery's launch and paying close attention to a chippedheat-resistant tile near the ship's nose landing gear, as well as other debriscaught by a video camera attached to the orbiter's external tank andground-based radar.

"There aresome folks in the imagery world that have found some things they're concernedwith on the [external] tank," Hill said. "The tools we took into orbit with us,that we finished using today...will allow us to absolutely know the state of theoutside of this orbiter."

In responseto one question, Hill stressed strongly that neither he nor NASA were not attemptingto play down or gloss over the chipped tile, even though current data examinedby engineers suggests it should not be a safety concern.

"The lastflight ended in catastrophe and we lost seven friends of ours because of TPSdamage," Hill said, referring to the Columbia mission. "So even where we'retalking about tile damage that is clearly within capability, that's going toget all of our attention and all of us are concerned about it. But we don'tmake decisions in spaceflight based on emotion, we make them based on the dataand we're looking at the data."

Bytomorrow, engineers should have enough data to determine whether they needadditional images of the area. Because Discovery's orbital boom was designed tobe able to reach nearly every inch of the shuttle's thermal protection system,Thomas could use it to get a close-up look of the chipped tile later in themission if needed.

"We havenot yet been given a request for that," Hill said, adding that should engineersrequire a boom survey of the chipped tile, a procedure could be worked up whileDiscovery's crew sleeps on Flight Day 3 in time for Flight Day 4 on July 29."To get the data to put the boom in the right spot, that's something that'svery complicated."

Wayne Hale,NASA's deputy shuttle program manager, told reporters at the briefing thathundreds of imaging specialists are going over much more ascent video, images andother data than ever gathered during a shuttle launch.

"We areabsolutely not being overwhelmed," Hale said. "[Data is] coming down exactly onschedule."

Discovery'smission is the first of two test flights for NASA's shuttle program. TheSTS-121 mission aboard Atlantis is currently slated to launch between Sept. 9and Sept. 24.