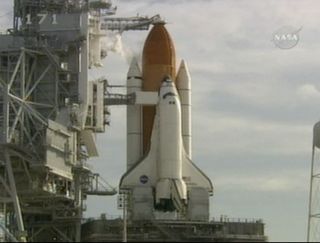 The STS-121 launch was scrubbed for a second day in a row due to concerns of thunder and lightning clouds.
(Image: © NASA)

CAPE CANAVERAL,Fla. - Poorweather again thwarted the launch of NASA's space shuttle Discovery Sundayfollowing a day of delays due to thunderstorms and thick clouds.

"We've concludedthat we're not going to have a chance to launch today," NASA launch directorMichael Leinbach told the STS-121 astronauts aboardDiscovery. "We've decided to terminate the count for today and stand down for48 hours."

At thestart of today's launch attempt, weather forecasters gave the space shot justa30 percent chance of leaving Earth today at 3:26 p.m. EDT (1926 GMT). Clouds, rain or nearby storms violated at least one flightrule - if not more- at one time or another.

"It'salmost easier to talk about what's not violating flight rules than what is," NASAlaunch commentator Bruce Buckingham said early in the day.

Over thenext two days, pad workers will top off the super-cold liquid hydrogen andliquid oxygen propellants that will power Discovery'sfuel cells during its planned 12-day mission. That activity will allow theshuttle's power system some extra margin for a possible mission extension dayduring the STS-121spaceflight.

NASA officialsand the STS-121 crew are hoping for that 13th mission day.

Weatherconditions are always a concern during shuttle launches, especially given NASA'sslim, 10-minute window to loft orbiters toward the International Space Station(ISS).

But inaway, worrying only about weather is a relief, NASA chief Michael Griffin told SPACE.com.

"It'scomforting because we always have the weather, and most of the time we alwayshave something else," Griffinsaid earlier today. "And as best as we can tell right now we don't haveanything else."

Scott Kelly,himself, is no stranger to launch scrubs. He served as shuttle pilot duringNASA's STS-103 mission to the Hubble Space Telescope in 1999. That mission,also aboard Discovery, suffered several days of delays, including one weatherscrub with the crew aboard, before finally reaching orbit.