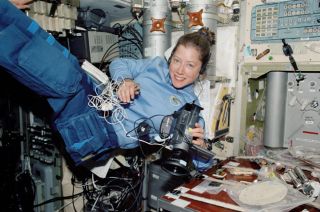 Astronaut PamelaMelroy, a two-time shuttle pilot, will become the second woman to command aNASA shuttle when she leads the upcoming STS-120 mission to the InternationalSpace Station (ISS), the space agency said Monday.

Melroy, aU.S. Air Force colonel hailing from Rochester, New York, will command a crew ofsix astronauts charged with delivering a new connecting node to the ISS. Builtfor NASA in Italy, the Node2 module will serve as a link between other habitable space stationcompartments.

Melroy isonly the second female astronaut to command a U.S. orbiter after shuttleveteran EileenCollins, who led NASA's STS-114return to flight mission in 2005 and retired inMay 2006. Collins first commanded a shuttle mission in 1999 after serving aspilot on two previous flights.

Selected tojoin NASA's astronaut corps in 1994, Melroy served as shuttle pilot aboard theDiscovery orbiter during STS-92,an ISS construction mission that launchedon Oct. 11, 2000. She also served as pilot for the STS-112shuttleflight aboard Atlantis during its ISS-bound mission in 2002.

Melroy joinedthe U.S. Air Force in 1983 after earning a degree in physics and astronomy fromWellesley College. She also earned a master's degree in Earth and planetarysciences from the Massachusetts Institute of Technology in 1984, NASA said.