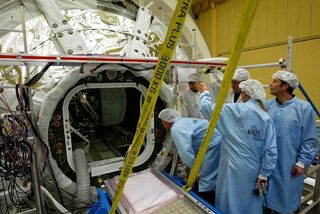 CAPE CANAVERAL - A Europeanscience laboratory will be delivered to a Kennedy Space Center processingfacility today after a transoceanic trip aboard one of the largest cargoaircraft in the world.

Set for launch aboard ashuttle in late 2007, the Columbuslab is the European Space Agency's primecontribution to the InternationalSpace Station project.

It arrived at KSC's shuttlerunway Tuesday aboard a giant Beluga aircraft, a European super transporterdesigned to carry huge cargo.

The cylindrical lab, whichis named for the European explorer who discovered the New World, is to be offloadedfrom the aircraft early today and then transported to the Space StationProcessing Facility in the KSC industrial area.

"We'll have awelcoming ceremony Friday which will include our international partners,"KSC spokeswoman Tracy Young said.

The Columbus lab is capableof housing up to 10 experiment racks the size of telephone booths on the insideof the module.

Once in orbit, the lab willbe attached to the starboard docking port of a U.S. node that will serve as agateway between the American, European and Japanese sections of the station. Itis scheduled to fly on the eighth of 16 stationassembly missions NASA aims to fly before retiring its three-orbitershuttle fleet.

Published under license from FLORIDATODAY. Copyright ? 2006 FLORIDA TODAY. No portion of this materialmay be reproduced in any way without the written consent of FLORIDA TODAY.