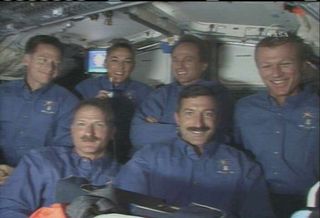 The six astronauts aboard NASA's space shuttle Atlantis participated in a series of television interviews Tuesday as they readied their orbiter for a Sept. 20, 2006 landing.
(Image: © NASA TV.)

CAPE CANAVERAL, Fla. - Six astronauts aboard NASA's space shuttle Atlantis arespending what is expected to be their last day in orbit, though poor landingweather could keep them spaceborne for one more day, mission managers said Tuesday.

"Theweather outlook for tomorrow is not as promising as I would like," Stitch saidduring a status briefing for Atlantis'STS-115 mission. "You'd like to come in with a nice, perfect forecast withclear skies and no wind."

But that'snot the case for the end of what has been a widelysuccessful STS-115 mission to resume construction of the International SpaceStation (ISS).

Cross windsare expected to be higher than allowable for Atlantis' first landingopportunity at 5:58 a.m. EDT (0958 GMT), with possible showers within a 30-mile(48-kilometer) perimeter and a potential cloud ceiling of about 5,000 feet (1,524meters).

NASA flightrules for that landing attempt - which would occur in the predawn darkness - callfor cross winds of less than 12 knots (13 miles per hour), no rain within 30miles (48 kilometers) and a thick cloud ceiling of no less than 8,000feet (2,438 meters).

Stitch saidthat, if the weather goes NASA's way, it could pass through Atlantis' returnrunway in time for a second landing attempt in daylight at 7:33 a.m. EDT (1133GMT).

"We'regoing to try to be smart with the timeline," NASA astronaut Tony Antonelli,serving as spacecraft communicator, told Atlantis' STS-115commander Brent Jett this morning. "If it looks early like we don't have achance, we'll try to knock it off early so we don't waste your efforts."

"Obviouslywe're ready to do whatever you guys need," Jett said. "And we'll be ready to gotomorrow if the weather's good."

OnlyAtlantis' KSC landing strip will be available Wednesday, though Stitch said hecould activate a backup site at California's Edwards Air Force Base in the Mojave Desert on Thursday depending on weather forecasts. A third landing site - NorthrupStrip at New Mexico's White Sands Space Harbor - is currently unavailable dueto standing water on its runways.

NASA wouldprefer Atlantis return directly to KSC rather than touch down at Edwards and beferried by its carrier plane across the country, which typically costs aboutone week in turnaround time and $1 million.

Stitch saidthat Jett, like most shuttle commanders, has more time rehearsing landings atKSC than at Edwards.

"And, ofcourse, it saves on the turnaround time," Stitch added.

NASA mustready Atlantis to serve as a rescue craft to support the planned Dec. 14 launchof its sister ship Discovery in case that orbiter suffers serious damage inflight and its crew is forced to take refuge aboard the ISS.

"We'llwatch the weather carefully and if it's a good day to land, we'll do so,"Stitch said, adding that the shuttle has enough supplies to last throughSaturday if needed.

"Thisflight has been everything that I could have imagined and more," STS-115mission specialist Heidemarie Stefanyshyn-Piper, who is making her firstspaceflight and participated in two of the mission's three spacewalks, toldtelevision reporters this morning.

Jett andhis fellow STS-115 crewmates spent much of today checking out theirspacecraft's systems to ensure all worked as it should. Astronauts fired theorbiter's thrusters, activated its hydraulics and control surfaces - used inthe Earth's atmosphere - and set up the seats they will take during reentry.

Theastronauts also participated in a rareorbital conference call with two other spacecraft crews - aboard the ISSand its new crew approaching in a SoyuzTMA-9 spacecraft - earlier today.

"We'regoing to start converting the shuttle into its reentry mode, sort of like anairplane," STS-115 mission specialist DanielBurbank told television reporters today. "We're just hoping the weatherwill cooperate and we'll be able to get in on our first try tomorrow."