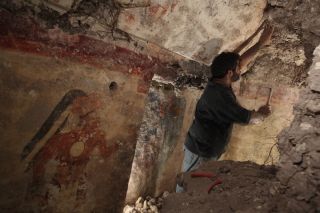 Archaeologist William Saturno of Boston University carefully uncovers art and writings left by the Maya some 1,200 years ago. The art and other symbols on the walls may have been records kept by a scribe, Saturno theorizes.
(Image: © Tyrone Turner © 2012 National Geographic)

If you believe in that sort of thing, humanity can expect a mere two months left of existence before the Mayan apocalypse hits Dec. 21.

Today (Oct. 21) starts the two-month countdown toward doomsday, according to an interpretation of the Mayan calendar that has taken hold in some New Age and spiritualist communities online.

Two ancient texts confirm the end date of the Mayan Long Count calendar on the winter solstice of this year, which is Dec. 21, 2012. That day is the last day of the 13th bak'tun, or 144,000-day cycle, of the calendar. Ancient Maya would have seen the end of the 13th bak'tun as the end of a full cycle of creation.

However, experts in Mayan history say the end of the Long Count calendar is the equivalent of needing to buy a new calendar every year in December — not a harbinger of doomsday.

"This new evidence suggests that the 13 bak'tun date was an important calendrical event that would have been celebrated by the ancient Maya; however, they make no apocalyptic prophecies whatsoever regarding the date," Marcello Canuto, the director of Tulane University Middle America Research Institute, told LiveScience after the discovery of an ancient text referring to the date.

Not all apocalypse believers think the Mayan Apocalypse will bring fire and brimstone, or extinguish life on Earth. According to John Hoopes, a scholar of Maya history at the University of Kansas, many believers see the day as a time of spiritual transformation.